The Pirates Next Door Jonny Duddle 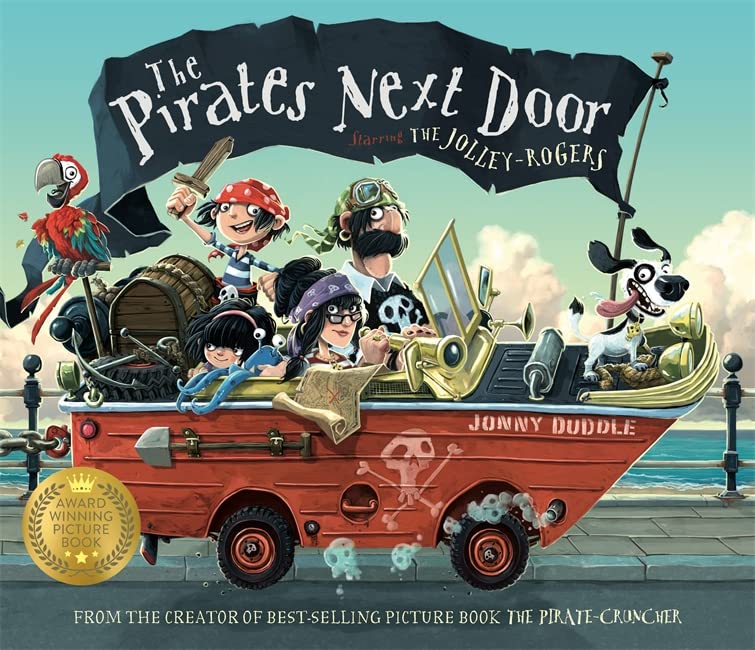 The Pirates Next Door by Jonny Duddle

The Pirates Next Door by Jonny Duddle

The Jolley-Rogers - a pirate family, are moving to Dull-on-Sea, a quiet seaside town. Stopping to fix up their ship, this unusual family get the whole neighbourhood spreading rumours. Defying the grown-ups, Matilda from next door decides to become friends with the youngest pirate son. When the Jolley-Rogers leave, the town discovers they were wrong to assume the worst - the pirate clan have buried treasure in everyone's gardens (shown in a stunning double-gatefold). Matilda feels sad until she discovers her own treasure - an incredibly exciting new pen friend.
Captain Duddle is the undisputed king of pirate picture books and the Jolley Rogers are unleashing merry mayhem on the poor, unsuspecting residents of sleepy seaside town Dull-on-Sea. With belly laughs throughout and lots of funny details to spot on each page, it's an absolute tricorn (that's a pirate hat, don't you know?) triumph. Look out for their wooden-legged dog and COMING SOON Jolley Rogers fiction for younger readers. -- WRD * WRD Books *
The Pirates Next Door tells the tale of Matilda, a little girl who lives in a gloomy seaside town, Dull-on-Sea. One day, new neighbours move in next door - a family of pirates, taking a break from the seas to fix their ship. Matilda thinks it's fantastic to have such exciting neighbours, especially a young lad her age, Jim, who's dressed in a pirate bandanna and an eye-patch. However, her mum, dad and the other neighbours are not so impressed with these new residents, The Jolley-Rogers, and tell her they'd rather she was friends with "normal girls and boys". The other residents accuse the pirates of terrorising the neighbourhood, being dirty and having lice, and their ship being full of rats. However, Matilda still insists on sitting next to Jonny at school as she thinks he's "cool". He tells her the pirates are used to this kind of reaction whenever they come to land - and when they finally depart, the neighbours discover just how wrong they were about the pirates after all. That might make the book sound a bit worthy. And while it does have a message about tolerance and prejudice, it's subtly hidden in an adventurous tale, written in wonderful rhyming verse and accompanied by vividly detailed and engaging illustrations. It's a lot longer than other picture books, so age-wise I'd say it would appeal to children of three and above, with a reading age from 6 or 7. I asked Little Miss E, age 5, and Little Man O, 3.5, what they thought of the book and while it was the humour and the pictures that really impressed them, they quickly understood the message about not judging people and always being kind. This is a fun and adventurous book with wonderfully-detailed illustrations and fast-paced, descriptive verse that you will be happy to read time and again. We highly recommend it. * Cardiff Mummy *
Jonny Duddle (Author, Illustrator) Jonny Duddle overheard the story of his first book The Pirate Cruncher while sailing on a square-rigger. Since then he has written even stranger tales including The Pirates of Scurvy Sands, The Pirates Next Door, Gigantosaurus and The King of Space. The Pirates Next Door won the Waterstones Prize in 2012 and was shortlisted for the Roald Dahl Funny Prize. Now in danger of becoming a landlubber, Jonny lives in Wales with his wife, Jane, and their daughters, Daisy and Rosie.
GOR003950301
9781848773929
1848773927
The Pirates Next Door by Jonny Duddle
Jonny Duddle
Jonny Duddle
Used - Very Good
Paperback
Templar Publishing
2012-03-01
32
Winner of Waterstones Children's Book Prize: Overall Winner 2012 Winner of Waterstones Children's Book Prize: Picture Books Category 2012 Short-listed for Roald Dahl Funny Prize: The Funniest Book for Children Aged Six and Under 2012
Book picture is for illustrative purposes only, actual binding, cover or edition may vary.
This is a used book - there is no escaping the fact it has been read by someone else and it will show signs of wear and previous use. Overall we expect it to be in very good condition, but if you are not entirely satisfied please get in touch with us
Trustpilot