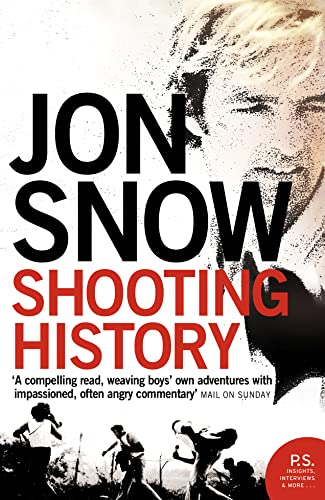 The compelling autobiography of one of the great and most committed newsmen of our time: full, frank, and occasionally very funny, Jon Snow's memoirs are as revealing about the great and the not-so-good as about his own passionate involvement in the reporting of world affairs.

The compelling autobiography of one of the great and most committed newsmen of our time: full, frank, and occasionally very funny, Jon Snow's memoirs are as revealing about the great and the not-so-good as about his own passionate involvement in the reporting of world affairs.

Jon Snow is perhaps the most highly regarded newsman of our time; his qualities as a journalist and as a human being - his passion, warmth, intelligence, frankness and humour - are widely recognised and evident for all to see most nights on Channel 4 News and now in the pages of his first book.

His vivid personal chronicle is filled with anecdotes and pithy observations, and delightfully records his life and times since becoming a journalist in the early 1970s. He reported widely on Cold War conflicts in Iran, Iraq, Afghanistan, Eritrea, Ethiopia, Angola and Central America before becoming a resident correspondent in Washington D.C. in the 1980s, and he has met and interviewed most of the world's leaders.

Drawing lessons from these experiences, he has pertinent things to say about how the increasing world disorder came about following the fall of the Berlin Wall; how the West's constant search for an enemy has helped unhinge the world; and how and why the media have, in general, been less than helpful in drawing attention to key political and global developments.

`He's much more than a newsreader. He understands what's happening and he provides intellectual underpinning. We know what he stands for and relate to it...and trust him as a man.' Observer

`Snow is the closest thing we have to a modern-day George Orwell...A vivid, accurate, hones guide to the key world events from 1975.' Independent

`Pacy, candid and anecdote-laden, Snow's account of a childhood spent in awe of his father is a delight.' Daily Mail

Jon Snow is Channel 4's regular news presenter and has 30 years' experience as a writer and television journalist. He has reported on most of the world's hotspots during that time, and in the 1980s was a resident correspondent in Washington D.C. In 2004 he won the Royal Television Society Award for Presenter of the Year.

GOR001230515
9780007171859
0007171854
Shooting History: A Personal Journey by Jon Snow
Jon Snow
Used - Very Good
Paperback
HarperCollins Publishers
2005-05-03
352
N/A
Book picture is for illustrative purposes only, actual binding, cover or edition may vary.
This is a used book - there is no escaping the fact it has been read by someone else and it will show signs of wear and previous use. Overall we expect it to be in very good condition, but if you are not entirely satisfied please get in touch with us
Trustpilot