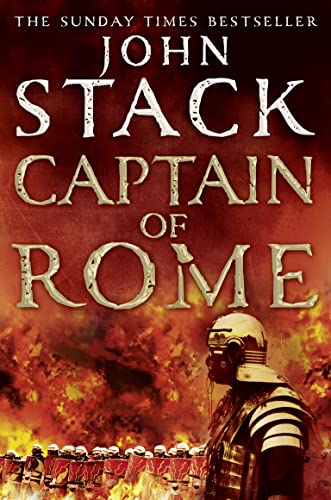 Captain of Rome by John Stack

The second installment in this thrilling maritime adventure; two mighty empires battle each other for control of the high seas.

Captain of Rome (Masters of the Sea) by John Stack

The second installment in this thrilling maritime adventure; two mighty empires battle each other for control of the high seas.

Atticus is the young captain of the Aquila, the flagship of the Roman navy's attack fleet. But his inexperienced commander's position has been bought, not earned. Bound to obey his superior, Atticus sails straight into a carefully-laid trap. In the brutal battle that follows, he pulls his men back from the brink of defeat only by disobeying orders.

Summoned to Rome, Atticus will pay a high price for his defiance. Despite his friendship with a Roman centurion, he is dangerously unversed in the politics of the Roman senate, and has created a powerful enemy.

So Atticus finds himself facing battles both at sea, against an ever-more ferocious enemy; and on board his own ship, from those who are thirsty for revenge...

John Stack was born and lives in County Cork. He has always wanted to write but has done a variety of jobs ending up in IT. He is presently writing the third book in the Masters of the Sea series.

GOR002407870
9780007351442
0007351445
Captain of Rome (Masters of the Sea) by John Stack
John Stack
Masters of the Sea
Used - Very Good
Paperback
HarperCollins Publishers
2010-10-28
400
N/A
Book picture is for illustrative purposes only, actual binding, cover or edition may vary.
This is a used book - there is no escaping the fact it has been read by someone else and it will show signs of wear and previous use. Overall we expect it to be in very good condition, but if you are not entirely satisfied please get in touch with us
Trustpilot