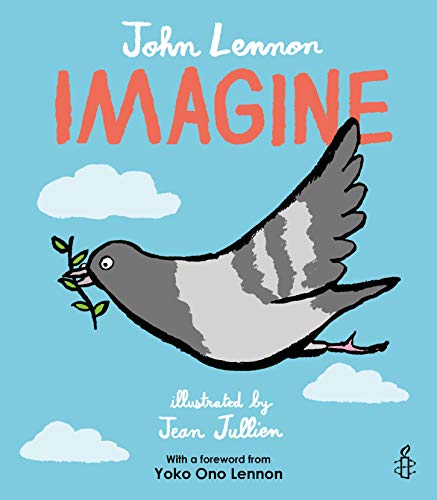 'Never have we all, child and grown-up child, needed this more, the words and the song in our hearts, lifting our spirits, giving us hope, and determination too to find the road to understanding, conciliation and peace.' - MICHAEL MORPURGO

'Imagine is a very powerful statement, written with an incredible deep love for humanity and its future' - YOKO ONO LENNON

'lovely to read to your child during these troubled times' - THE SUN, Children's Book of the Week

Join one little pigeon on her mission to spread the word of peace around the world. Set to the lyrics the iconic song Imagine, this book brings John Lennon's enduring message of peace and tolerance to a new generation. A royalty from every copy sold will go to charity Amnesty International.
Children's Book of the Week: 'lovely to read to your child during these troubled times.'

* The Sun *
'[the] message is as relevant to society today as it was when it was released' * Design Boom *
'A lovely picture book' * Angels & Urchins *
"effective and very poignant" * The Bookseller *
'The artist's boldly outlined images...have a simple, heartfelt poignancy that make this beautiful book the perfect starting point for introducing Lennon's message of tolerance, understanding, inclusiveness, unity and peace to today's children. It's certainly as relevant as when it was written over 45 years ago: indeed, we desperately need it now even more than ever.' * Red Reading Hub *
"An inviting, relevant, and timely message of tolerance, inclusiveness, unity, and peace. Just imagine." * Kirkus Reviews *
"For fans of Lennon's song eager to introduce it to a new generation, Jullien's panoply of boldly outlined, lovable birds offers an accessible entry point to ideas of peace, kindness, and justice." * Publisher's Weekly *

John Lennon was a singer, songwriter, peace and human rights activist, author, artist, and continues to be a worldwide inspiration. Born in 1940 in Liverpool, he rose to fame with his band The Beatles in the 1960s, and went on to have an acclaimed solo career until his death in 1980. Lennon's marriage and collaboration with artist Yoko Ono inspired his iconic peace anthem "Imagine". Among Lennon's books which are collections of his stories and drawings are: In His Own Write, A Spaniard in the Works, Skywriting by Word of Mouth, AI - Japan Through John Lennon's Eyes, and Real Love- the Drawings for Sean.

Yoko Ono Lennon is an artist whose thought-provoking work challenges people's understanding of art and the world around them. From the beginning of her career, she was a conceptualist whose work encompassed performance, instructions, film, music, sculpture, installation and writing. Born in Tokyo, she moved to New York aged twenty and opened her Chambers Street loft in 1960, where she hosted exhibitions and performances. She has shown her work all over the world, including several films and her first retrospective, in France in 2016. In 2007, Ono created the permanent installation IMAGINE PEACE TOWER on Videy Island, Iceland, and continues to work tirelessly for peace with her IMAGINE PEACE campaign. In 2009 Ono received the Golden Lion for Lifetime Achievement from the Venice Biennale.

JEAN JULLIEN is a French graphic designer currently living in London. He comes from Nantes and did a graphic design degree in Quimper before coming to London. He graduated from Central Saint Martins in 2008 and from the Royal College of Art in 2010. His practice ranges from Illustration to photography, video, costumes, installations, books, posters and clothing to create a coherent yet eclectic body of work.

GOR009243557
9781786031853
178603185X
Imagine - John Lennon, Yoko Ono Lennon, Amnesty International illustrated by Jean Jullien by John Lennon
John Lennon
Used - Very Good
Paperback
Frances Lincoln Publishers Ltd
2018-03-01
32
N/A
Book picture is for illustrative purposes only, actual binding, cover or edition may vary.
This is a used book - there is no escaping the fact it has been read by someone else and it will show signs of wear and previous use. Overall we expect it to be in very good condition, but if you are not entirely satisfied please get in touch with us
Trustpilot