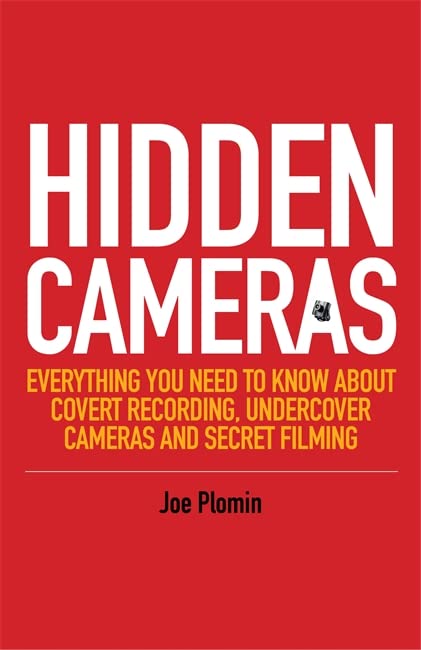 Providing authoritative information on the practicalities of using hidden cameras to expose abuse or wrongdoing, this book is vital reading for anyone who may use or encounter secret filming. It gives specific advice on using phones or covert cameras and covers the complex legal and ethical issues that need to be considered.

Hidden Cameras: Everything You Need to Know About Covert Recording, Undercover Cameras and Secret Filming by Joe Plomin

The complete and authoritative guide to the use of hidden cameras to expose abuse or wrongdoing.

Secret filming is no longer the preserve of specialists, professional journalists and private investigators. Drawing on the author's own experience producing undercover documentaries and wearing secret cameras, this book explains covert recording for the general public, including specific advice on the practicalities of using a phone or covert camera to record evidence. It considers the legal and ethical issues and provides vital information for anyone who may use or encounter secret filming, including the people or organisations that might be filmed, regulators, social workers, local government officials and anyone who may encounter it in court. It also looks to the future of covert filming and the implications of technological advances, such as drone cameras.

In the wrong hands, secret cameras can ruin lives - but they can also prove wrong-doing and do good. BBC Panorama producer Joe Plomin takes the reader through the ethical minefields in this ground-breaking book. -- John Sweeney, BBC reporter
Joe Plomin is one of the most thoughtful and dedicated journalists with whom I have had the honour of working. These are qualities that shine through in this book. The stories based on his years of using secret cameras to expose wrongdoing make this a very human exploration of covert filming. It is a master-class not just in how to use the technology, but also in the ethical considerations and careful thinking that should lie behind every decision to switch on a hidden camera. -- Alison Holt, BBC Social Affairs Correspondent, Royal Television Society Specialist Journalist of the Year, 2015 and Winner of the Orwell Prize for Exposing Britain's Social Evils, 2015
No one understands secret filming like Joe Plomin. This book is essential reading for all those trying to hold power to account in the digital age. -- Paul Mason, journalist and broadcaster
I recommend that everyone, whether in favour, sympathetic or fundamentally opposed to covert filming, read this enlightening and incredibly human story. Plomin mixes his experiences and stories of his own undercover work with the history of covert investigative journalism from its infancy in 1997 to the present day, referencing the revelation of such injustices as the death of Ian Tomlinson during the G20 summit protests seven years ago. Importantly, too, he relates the stories of families, so worried about the care of their love ones that they resort to hidden cameras. There is also information for anyone with thoughts of undertaking covert filing about how to ensure it is bout legal and ethical, as well as consideration of where surveillance may be in the future. The book is easy to read, balance, professional and heartfelt. it is a very important contribution to the debate on this emotive subject. -- Lynne Phair, independent consultant nurse * The Journal of Dementia Care *
Hidden Cameras is eminently readable and takes you through the history of undercover reporting, what equipment to use, and the ethical and moral issues that are raised when secretly filing vulnerable people and their carers. The section on what to do with footage obtained by secret filming is particularly thought-provoking. Covert filming is always a last resort that families feel they have reached when their concerns about quality of care have not been addressed... This is an excellent book written by someone who has been instrumental in the use of undercover cameras an secret filming. This subject is here to stay, and we need to understand and debate its use. -- Jane Buswell, independent nurse consultant * Nursing Older People *
Joe Plomin, one the best-known producers of covert television documentaries, has led some of Britain's most high-profile undercover investigations. He was the undercover producer for the celebrated BBC documentary exposing the abuse of people with learning disabilities at Winterbourne View private hospital in 2011.
Introduction. 1. How Did We Get Here?: The History of Covert Recording. Undercover Tales: Real Families Doing Secret Filming. 2. 'Proper' Secret Cameras: Secret Filming Using a Covert Camera. Undercover Tales: Eek! Nearly Being Discovered. 3. Using a Phone Camera, Secretly: Covert Recording Using a Mobile or Cellular Telephone. Undercover Tales: Sneaky Phone Filming. 4. Do You Really Have To?: Ethical Dilemmas - Privacy, the Public Interest and Deception. Undercover Tales: Victorian Infiltrations: Heroes and Anti-Heroes. 5. Do People Get in Trouble?: Secret Filming and the Law. Undercover Tales: Whistleblowers: Threats and Fears. 6. What You Don't Realise...: The Challenges That Most Often Surprise People. Undercover Tales: Stories of Physical and Emotional Pain. 7. What Do You Do With It?: What Happens Next, After the Camera is Switched Off. Undercover Tales: Secret Filming in Care Homes. 8. How's It Gonna End?: The Next Generation of Covert Cameras, and the Future of Secret Filming. Undercover Tales: Back to the Future: Old Problems, New Cameras.
GOR007623615
9781849056434
1849056439
Hidden Cameras: Everything You Need to Know About Covert Recording, Undercover Cameras and Secret Filming by Joe Plomin
Joe Plomin
Used - Very Good
Paperback
Jessica Kingsley Publishers
20160221
224
N/A
Book picture is for illustrative purposes only, actual binding, cover or edition may vary.
This is a used book - there is no escaping the fact it has been read by someone else and it will show signs of wear and previous use. Overall we expect it to be in very good condition, but if you are not entirely satisfied please get in touch with us
Trustpilot