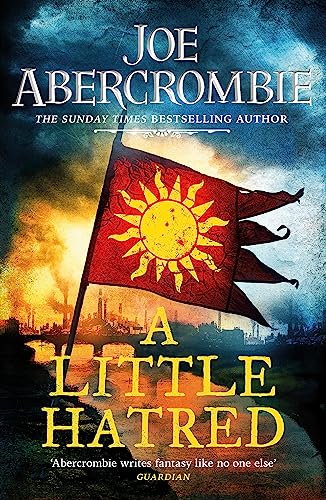 A Little Hatred by Joe Abercrombie

A Little Hatred: Book One by Joe Abercrombie

The chimneys of industry rise over Adua and the world seethes with new opportunities. But old scores run deep as ever.

On the blood-soaked borders of Angland, Leo dan Brock struggles to win fame on the battlefield, and defeat the marauding armies of Stour Nightfall. He hopes for help from the crown. But King Jezal's son, the feckless Prince Orso, is a man who specialises in disappointments.

Savine dan Glokta - socialite, investor, and daughter of the most feared man in the Union - plans to claw her way to the top of the slag-heap of society by any means necessary. But the slums boil over with a rage that all the money in the world cannot control.

The age of the machine dawns, but the age of magic refuses to die. With the help of the mad hillwoman Isern-i-Phail, Rikke struggles to control the blessing, or the curse, of the Long Eye. Glimpsing the future is one thing, but with the guiding hand of the First of the Magi still pulling the strings, changing it will be quite another...

Highly recommended - a funny, finely-wrought, terrifically energetic work of high fantasy. Seek it out -- Joe Hill
Goddamn magnificent * Adrian Tchaikovsky *
A tale of brute force and subtle magic set in a world on the cusp of an industrial revolution . . . a vivid and jolting tale. * ROBIN HOBB *
The books are good, really good. They pulled me in. Well-developed world. Unique, compelling characters. I like them so much that when I got to the end of the second book and found out the third book wasn't going to be out in the US for another three months, I experienced a fit or rage, then a fit of depression, then I ate some lunch and had a bit of lay down' -- Patrick Rothfuss on the First Law trilogy
Witty, bloody and fun. * NICHOLAS EAMES *
Joe Abercrombie writes with terrifying wit, humour and heart * Ben Aaronovitch *
A new epic saga of war and power set in a world where the industrial age is rising . . . With expert craft, Abercrombie lays the groundwork for another thrilling trilogy * Publishers Weekly starred review *
Rife with emotion with wit to spare, both honed to an effortlessly fine edge. A Little Hatred is the joy of watching a master of the craft with his tools at their sharpest * Sam Sykes, author of Seven Blades of Black *
Joe Abercrombie's powerful voice raises the bar in any literary genre. Fantasy fans are beyond fortunate he chose this one * Myke Cole, author of The Armored Saint *
This book is exceptional. Indisputably, spectacularly, criminally good. Clever, funny, and packed with cutting commentary, it's well worth the wait. * FANTASY BOOK REVIEW *
Abercrombie has created one of the most magnificent, unforgettable casts of characters to ever grace the pages of a fantasy book * Grimdark Magazine *
Gripping and intriguing. * STARBURST MAGAZINE *
The intricately woven story never slackens its merciless grip as we follow our heroes and heroines through battlefields, boardrooms and bedrooms to their destinies - deserved and undeserved alike. * Daily Mail *
He writes of slum life with graphic realism, and his rendering of battle scenes is to die for. -- Eric Brown * The Guardian *
All told within a complex, fascinating plot that will keep you up long after bed time. The perfect escape from the topsy- turvy world that we're living in at the moment. -- Natasha Harding * The Sun *
Both the magic and the class struggle are subtly handled by Abercrombie, while the humour is delightfully rough. It's a tremendous book, as if Friedrich Engels and Terry Pratchett had agreed to collaborate in rewriting George RR Martin. * MORNING STAR *

Joe Abercrombie is the author of the First Law Trilogy (The Blade Itself, Before They Are Hanged and Last Argument of Kings). His standalone novels (Best Served Cold, The Heroes and Red Country) are also set in the First Law world.

Joe formerly worked as a freelance film editor and is now a full time writer who lives in Bath with his family.

GOR010744817
9780575095885
0575095881
A Little Hatred: Book One by Joe Abercrombie
Joe Abercrombie
The Age of Madness
Used - Very Good
Paperback
Orion Publishing Co
20200514
512
null null null null null null null null null null
Book picture is for illustrative purposes only, actual binding, cover or edition may vary.
This is a used book - there is no escaping the fact it has been read by someone else and it will show signs of wear and previous use. Overall we expect it to be in very good condition, but if you are not entirely satisfied please get in touch with us
Trustpilot