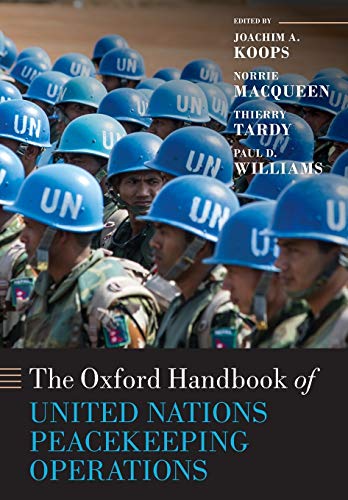 This volume presents an authoritative and accessible examination and critique of UN peacekeeping operations.

The Oxford Handbook on United Nations Peacekeeping Operations presents an innovative, authoritative, and accessible examination and critique of the United Nations peacekeeping operations. Since the late 1940s, but particularly since the end of the cold war, peacekeeping has been a central part of the core activities of the United Nations and a major process in global security governance and the management of international relations in general. The volume will present a chronological analysis, designed to provide a comprehensive perspective that highlights the evolution of UN peacekeeping and offers a detailed picture of how the decisions of UN bureaucrats and national governments on the set-up and design of particular UN missions were, and remain, influenced by the impact of preceding operations. The volume will bring together leading scholars and senior practitioners in order to provide overviews and analyses of all 65 peacekeeping operations that have been carried out by the United Nations since 1948. As with all Oxford Handbooks, the volume will be agenda-setting in importance, providing the authoritative point of reference for all those working throughout international relations and beyond.
As with all Oxford Handbooks, this publication masters its enormous task with precision and elegance, providing readers with insightful summary chapters in Part I, followed by highly readable case studies in chronological order of the peacekeeping operations in Part II . . . the editors and writers have made an important contribution to promote such an understanding among the UN member states. * Helmut Volger, PassBlue Blog *
These chapters cover extensive ground and provide an up-to-date perspective on peacekeeping and international security. They also succeed in dispelling the conceptual confusion that prevails in some corners of the literature on peace missions . . . The book brings together an impressive group of academics and practitioners including leading scholars, senior diplomats and military officers with first-hand experience in UN peace operations. * Patrick A Mello, Political Studies Review *
Joachim A. Koops is Associate Professor of Political Science at Vesalius College, Free University of Brussels (VUB) and Academic Director of the European Peace & Security Studies (EPSS) Programme and the Executive Course in Global Risk Analysis and Crisis Management (GRACM). He is also Research Professor at the VUB's Institute for European Studies and the founding Director of the Global Governance Institute (GGI), Brussels. His latest publications include SHIRBRIG and the Project of a UN Army: Successes, Failures, Lessons Learned (co-authored with C. Tatschl, Nomos, 2014), The Responsibility to Protect and the Third Pillar: A Critical Appraisal (co-edited with D. Fiott, PalgraveMacMillan, 2015), and The European Union as an Integrative Power? Assessing the EU's Effective Multilateralism towards the United Nations and NATO (Brussels University Press, 2011). Norrie MacQueen is Honorary Research Fellow in the School in International Relations at the University of St Andrews. He worked for the Mozambican Ministry of Education in the years following the country's independence and taught for several years at the University of Papua New Guinea. More recently he served as an electoral officer with the United Nations peacekeeping mission in Timor-Leste. His latest books include: The United Nations, Peace Operations and the Cold War (2nd edition Longman, 2011), Humanitarian Intervention and the United Nations (Edinburgh UP, 2011), and The United Nations: a Beginner's Guide (Oneworld, 2010). Thierry Tardy is Senior Analyst at the European Union Institute for Security Studies (EUISS) in Paris. Previously he was Senior Fellow at the Geneva Centre for Security Policy (GCSP). He has researched and published on conflict management with a particular focus on the United Nations and the European Union, inter-institutional cooperation in security governance, security regionalism, and the EU Common Security and Defence Policy. His books include Peacekeeping in Africa: The Evolving Security Architecture (Routledge, 2014, edited with M. Wyss), and European Security in a Global Context. Internal and External Dynamics (Routledge, 2009, edited). Paul D. Williams is Associate Professor in the Elliott School of International Affairs at the George Washington University, USA. He also serves as a Non-resident Senior Adviser at the International Peace Institute (IPI) in New York City and a Visiting Professor at the Institute for Peace and Security Studies in Addis Ababa, Ethiopia. At IPI, he co-manages the Providing for Peacekeeping Project, which aims to generate and disseminate data and analysis to support efforts to improve the quality of troop and police contributions to UN peacekeeping and fill key capability gaps in those missions. His latest books include: Providing Peacekeepers: The Politics, Challenges and Future of UN Peacekeeping Contributions (Oxford University Press, 2013), Understanding Peacekeeping (Polity, 2nd ed. 2010), and The International Politics of Mass Atrocities: The Case of Darfur (Routledge, 2010).
PART I: CONCEPTS AND PERSPECTIVES; PART II: UN PEACEKEEPING OPERATIONS - 1948-2013; SECTION 1: EARLY EXPERIENCES - 1948-1963; SECTION 2: COLD WAR PEACEKEEPING - 1964-1987; SECTION 3: POST-COLD WAR PEACEKEEPING - 1988-1998; SECTION 4: PEACEKEEPING IN THE TWENTY-FIRST CENTURY - 1999-2013
NLS9780198809241
9780198809241
0198809247
The Oxford Handbook of United Nations Peacekeeping Operations by Joachim Koops (Dean of Vesalius College & Research Professor IES (VUB) and Director of the Global Governance Institute (GGI), Dean of Vesalius College & Research Professor IES (VUB) and Director of the Global Governance Institute (GGI), Vrije Universiteit Brussel)
Joachim Koops (Dean of Vesalius College & Research Professor IES (VUB) and Director of the Global Governance Institute (GGI), Dean of Vesalius College & Research Professor IES (VUB) and Director of the Global Governance Institute (GGI), Vrije Universiteit Brussel)
Oxford Handbooks
New
Paperback
Oxford University Press
2017-07-27
944
N/A
Book picture is for illustrative purposes only, actual binding, cover or edition may vary.
This is a new book - be the first to read this copy. With untouched pages and a perfect binding, your brand new copy is ready to be opened for the first time
Trustpilot