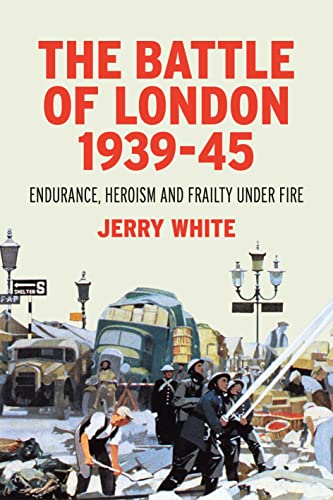 The definitive, meticulously researched social history of London in the Second World War, which transformed the capital, and life within it, beyond recognition.

Britain and Germany were at war for almost six long years.

The Battle of London 1939-45: Endurance, Heroism and Frailty Under Fire by Jerry White

The definitive social history of London in the Blitz, which transformed life in the capital beyond recognition.

For Londoners the six long years of the Second World War were a time of almost constant anxiety, disruption, deprivation and sacrifice. The Blitz began in earnest in September 1940 and from then on, for prolonged periods, London was under sustained aerial bombardment by night and by day. Throughout the war, the capital was the nation's front line; by its end, 30,000 Londoners had lost their lives.

Yet if the bombing defined the era for those who lived through it, the months of terror were outnumbered by those spent knitting together the fabric of daily life at work, in the home, on the allotment, in the cinema or theatre and, not least, standing in those interminable queues for daily necessities that were such a feature of London's war.

Much has been written about 'the Myth of the Blitz' but in this riveting social history, Jerry White has unearthed what actually happened during those tempestuous years, getting close up to the daily lives of ordinary people, telling the story through their own voices. At the end of it all, the Battle of London was won not on the playing fields of Eton but in the playgrounds of a thousand council elementary schools across the capital.

The Battle of London 1939-45... benefits hugely from a vast and well-chosen range of quotes and anecdotes, conjuring the atmosphere of a city under siege with vivid force. What's most striking in this raw and comprehensive portrait of a city on fire is just how enchanting and appealing it is: you actually start wishing you had been alive to witness it -- Sebastian Milbank * Tablet *
Jerry White is one of London's best historians...and in this enveloping book he tries to scrape away the myths that have obscured our view of the Second World War and reintroduce us to what in the city between 1939 and 1945 was actually like -- Andrew Holgate * Sunday Times *
Professor Jerry White teaches London history at Birkbeck, University of London. He is the author of an acclaimed trilogy of London from the eighteenth to the twentieth centuries. His more recent books include Mansions of Misery: A Biography of the Marshalsea Debtors' Prison and Zeppelin Nights, a social history of London during the First World War. He was awarded the honorary degree of Doctor of Literature by the University of London in 2005 and is a Fellow of the Royal Historical Society.
NGR9781847923011
9781847923011
1847923011
The Battle of London 1939-45: Endurance, Heroism and Frailty Under Fire by Jerry White
Jerry White
New
Hardback
Vintage Publishing
2021-11-04
448
N/A
Book picture is for illustrative purposes only, actual binding, cover or edition may vary.
This is a new book - be the first to read this copy. With untouched pages and a perfect binding, your brand new copy is ready to be opened for the first time
Trustpilot