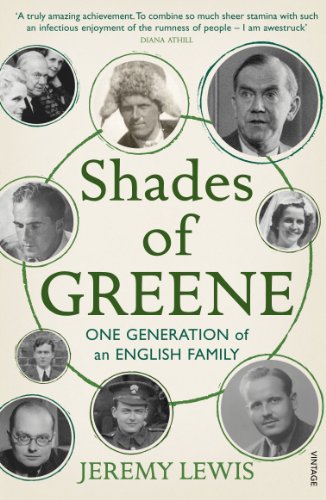 Shades of Greene by Jeremy Lewis

This book explores for the first time this generation of the Greene family in colourful detail - their relationships and shared history, and their lives - as explorers, writers, doctors, spies, politicians and much more.

Shades of Greene: One Generation of an English Family by Jeremy Lewis

In the early years of the last century, two brothers, Charles and Edward Greene, settled in Berkhamsted, a small country town thirty miles from London. There they were to found a remarkable dynasty - fathering twelve children between then - each of whom were to lead varied, well-documented and extraordinary lives.

This book explores for the first time this generation of the Greene family in colourful detail - their relationships and shared history, and their lives - as explorers, writers, doctors, spies, politicians and much more. There is Graham, one of the greatest English writers of the twentieth century; Hugh, the Daily Telegraph's Berlin corespondent in the years leading up to WW2, and later Director-General of the BBC; Raymond, a brilliant mountaineer and medical man who took part in the 1933 Everest expedition; their sister Elisabeth, MI6 agent, enlisting family and friends into the secret service; cousin Ben, a pacifist and Labour Party activist who was interned in 1940 at the same time as Oswald Mosley; his sister, Barbara, who spent the war in Germany; and their younger brother Felix, a pioneer of radio journalism and apologist for Communist China, who moved to a commune in California with his cousin Christopher Isherwood and Aldous Huxley; and Herbert, the black sheep of the family, fantasist and amateur spy.

Interlacing biography, history, high adventure and scenes from literary life, Shades of Greene provides a riveting insight into the self-confident, enterprising, upper middle-class English world that flourished between the 1920s and the 1970s: and into a truly remarkable tribe.

A celebration of a remarkable family', 'a remarkably detailed account of the old-boy network, seen from the sunny side -- John Carey * Sunday Times Culture *
An adept and confident editor, choosing only the most memorable anecdotes and constantly reminding the reader of the interplay between family members', 'It is clear that the achievements of the extended Greene family were truly extraordinary. In Shades of Greene they have a worthy chronicle. -- Tim Butcher * The Times *
Shades of Greene is an ambitious undertaking that has needed a prodigious amount of research ... Mr Lewis displays skill and stamina in interweaving his subjects' lives ... with his sense of mischief and his see-through glass prose, Greene would surely have approved * Economist *
Lewis's hugely detailed, exhaustively researched family saga makes you marvel, again and again, at the strangeness of this very English family, while leaving you fervently grateful you're not actually related to them -- John Walsh * Independent *
Lewis has a first class nose for truffling out good anecdotes -- Ian Irvine * Observer *
A former publisher and the deputy editor of the Oldie, Jeremy Lewis has written three volumes of autobiography and biographies of Cyril Connolly, Tobias Smollett and Allen Lane, the founder of Penguin Books. Shades of Greene: One Generation of an English Family, was published by Cape in 2010.
GOR011180926
9780099551881
0099551888
Shades of Greene: One Generation of an English Family by Jeremy Lewis
Jeremy Lewis
Used - Like New
Paperback
Vintage Publishing
2011-04-07
592
N/A
Book picture is for illustrative purposes only, actual binding, cover or edition may vary.
The book has been read, but looks new. The book cover has no visible wear, and the dust jacket is included if applicable. No missing or damaged pages, no tears, possible very minimal creasing, no underlining or highlighting of text, and no writing in the margins
Trustpilot