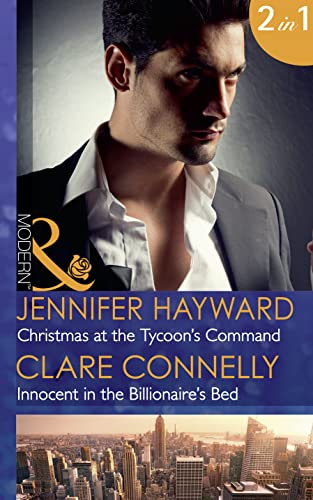 Christmas At The Tycoon's Command by Jennifer Hayward

Christmas at the Tycoon's Command by Jennifer Hayward

Christmas at the Tycoon's Command by Jennifer Hayward

Control is paramount to Nico-after his father's bankruptcy lost him everything, nothing will distract him from succeeding. He's always kept a tight rein on his craving for Chloe, well-aware she alone has the power to disarm him. But now, unable to deny their connection, Nico is determined to reclaim control, and take Chloe as his own!

Innocent in the Billionaire's Bed by Clare Connelly

Rio Mastrangelo doesn't want anything from the father who never acknowledged him. So when he unexpectedly inherits an island paradise, he's determined to sell it as fast as he can! But the potential purchaser who lands on his shores is not the spoiled heiress he's been expecting-and her luscious body fills him with a rush of hot, undeniable desire.

Cash-strapped Tilly Morgan accepted a payment to impersonate her best friend, but she hadn't bargained on sexy Rio. When a storm hits, trapping them together, there's nowhere to run from their raging hunger-and passion threatens to uncover Tilly's every vulnerability...

Award-winning author JENNIFER HAYWARD emerged on the publishing scene as the winner of Harlequin's So You Think You Can Write global writing contest. The recpient of Romantic Times Magazine's Reviewer's Choice Award for Best Harlequin Presents of 2014 Jennifer's careers in journalism and PR, including years of working alongside powerful, charismatic CEOs and traveling the world, have provided perfect fodder for the fast-paced, sexy stories she likes to write.
GOR008834936
9780263925500
0263925501
Christmas At The Tycoon's Command: Christmas at the Tycoon's Command (The Powerful Di Fiore Tycoons) / Innocent in the Billionaire's Bed (Mills & Boon Modern) by Jennifer Hayward
Jennifer Hayward
Used - Very Good
Paperback
HarperCollins Publishers
2017-11-30
384
N/A
Book picture is for illustrative purposes only, actual binding, cover or edition may vary.
This is a used book - there is no escaping the fact it has been read by someone else and it will show signs of wear and previous use. Overall we expect it to be in very good condition, but if you are not entirely satisfied please get in touch with us
Trustpilot