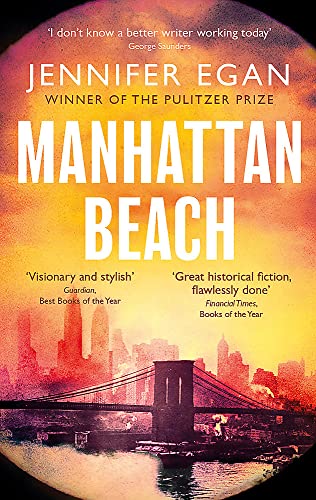 The long-awaited novel from the bestselling author of Pulitzer Prize-winning A Visit From the Goon Squad.

The long-awaited novel from the Pulitzer Prize-winning author of A Visit from the Goon Squad, Manhattan Beach opens in Brooklyn during the Great Depression. Anna Kerrigan, nearly twelve years old, accompanies her father to the house of a man who, she gleans, is crucial to the survival of her father and her family. Anna observes the uniformed servants, the lavishing of toys on the children, and some secret pact between her father and Dexter Styles.

Years later, her father has disappeared and the country is at war. Anna works at the Brooklyn Navy Yard, where women are allowed to hold jobs that had always belonged to men. She becomes the first female diver, the most dangerous and exclusive of occupations, repairing the ships that will help America win the war. She is the sole provider for her mother, a farm girl who had a brief and glamorous career as a Ziegfield folly, and her lovely, severely disabled sister. At a night club, she chances to meet Styles, the man she visited with her father before he vanished, and she begins to understand the complexity of her father's life, the reasons he might have been murdered.

Mesmerizing, hauntingly beautiful, with the pace and atmosphere of a noir thriller and a wealth of detail about organized crime, the merchant marine and the clash of classes in New York, Egan's first historical novel is a masterpiece, a deft, startling, intimate exploration of a transformative moment in the lives of women and men, America and the world. Manhattan Beach is a magnificent novel by one of the greatest writers of our time.

Beautifully rendered . . . genuinely affecting and handsomely constructed. It moves for all the right reasons. * Independent *
This is a novel that will pull you in and under and carry you away on its rip tides . . . Anna's plight as a woman whose will is larger than her circumstances is dramatised with tremendous power. Its resonances continue to wash over the reader long after the novel ends. * the Guardian *
Egan explains her wish to write a 'heroine-driven adventure story' set at a time when women had little freedom to steer their own lives. She has succeeded magnificently . . . here, the detail serves only to deepen and enrich. Mystery novels, thinks Anna, are unsatisfying in part because they take place 'in a single realm' only. The genius of this book is that Egan successfully plumbs so many. * Daily Mail *
A gripping, modern version of a 19th century novel . . . such an absorbing read. * Evening Standard *
A fabulous read * Independent, Autumn's Best Books. *
Genuinely affecting and handsomely constructed * Independent *
Fine turns of phrase, a richly imagined environs and a restless investigation into human nature . . . Egan really looks, and so do her characters. This is a novel that deserves to join the canon of New York stories. * New York Times Book Review *
An absorbing narrative . . . brilliantly realised * the Spectator *
Egan's first foray into historical fiction, this is a more conventional book than her fans might expect, but it's as darkly immersive an experience * Mail on Sunday Event *
Flawlessly done, with enough of a spin on the usual historical-novel tropes to make the whole enterprise seem surprisingly fresh. The flawlessness includes ease of consumption: I read the book in one sitting without effort and without even noticing that I wasn't tempted to check my social media. * Financial Times *
Anna is a formidable heroine: passionate, stoic, emotionally and physically courageous. Her younger sister is an invalid for whom her glamorous showgirl mother has abandoned her career; the descriptions of caring for this beautiful, beloved and helpless child are tender and moving. * The Times *
Egan's descriptive writing is superlative . . . She creates intelligently drawn characters, sensitively explores their inner worlds and takes care to use her historical research wisely.' * Sunday Times *
[An] electrifying thriller noir . . . it's gloriously addictive. * Saga magazine *
Rich in historical detail, full of seductive characters and teeming with human incident, Manhattan Beach proves once again what a gifted storyteller Egan is ... Manhattan Beach is an enthralling mystery tale * Tatler *
Thoroughly realised characters, an involving plot - a triumphant achievement * Woman & Home *
Egan effortlessly weaves these issues into a compelling story of a young woman seeking both to prove herself in a man's world * Running in Heels *
A luminous New York story . . . To find a compelling story well told, one that is full of complex characters and sentences so luminous they stop you in your tracks, is one of literature's greatest pleasures. That pleasure is bestowed liberally by Jennifer Egan in Manhattan Beach. * Irish Times *

Exhaustively researched and fluently told, the novel creates a fully believable world with characters we can identify with and care about. A quietly absorbing read.

* Derby Telegraph *
The novel I most enjoyed was Jennifer Egan's Manhattan Beach, a historical thriller that was quite as visionary and stylish as one would expect from the author. * Tom Holland, The Guardian Best Books of the Year *
One of the joys of my reading year was Jennifer Egan's Manhattan Beach. She tells an intimate and unusual story set in Brooklyn in the second world war, centred around the flinty Anna Kerrigan who becomes the only woman training to be a diver in the Navy Yard, and whose difficult home life is drawn with great compassion. Egan captures marvellously the precarious heightened atmosphere of wartime New York. * Kirsty Wark, The Guardian Best Books of 2017 *
Opening in Brooklyn during the 1930s Depression, Egan's superb novel follows its pioneering heroine into the Naval Dockyard where she works as a diver, repairing battleships amid the turmoil of the Second World War. Scenes describing her dangerous descents to the seabed in her 200lb diving suit and claustrophobic helmet make you almost hyperventilate with tension. Suspense of other kinds tingles through an ingeniously constructed plot from the author of the Pulitzer-winning A Visit from the Goon Squad. * Sunday Times, 2017's Best Books *
From the author of the Pulitzer-winning novel A Visit from the Goon Squad comes this cinematic story of an Irish family in Brooklyn, just about coping with the Great Depression and the Second World War. It's exquisitely written historical fiction, and will pull you in from the vivid opening scene. * Red magazine: 2017's Best Books by Women That We Should All Read *
This is a book of epic sweep and ambition whose heroine, Anna, diving beneath the waves, is a memorable figure. Egan's work has always been difficult to pin down, playing tricks with narrative conventions and the reader's expectations. This feels like her most approachable novel so far, in places as daring and unusual as A Visit from the Goon Squad but with more of a story and a heart. * Alex Preston, the Observer Books of the Year *
The Ziegfeld follies, the criminal underworld of Thirties New York City, WWII maritime missions - all are brought to life with irresistible intensity. * Mail on Sunday, Books of the Year *
Great historical fiction, flawlessly done * Financial Times, Books of the Year *
Immensely satisfying . . . bristling with armaments yet intimate in tone . . . This is an old-fashioned page-turner, tweaked by this witty and sophisticated writer so that you sometimes feel she has retrofitted sleek new engines inside a craft owned for too long by James Jones and Herman Wouk. * New York Times, Times' Critics Top Books of 2017 *
A story to relax into and enjoy. * The Observer *
Jennifer Egan is the author of A Visit From The Goon Squad, The Keep, Look at Me, The Invisible Circus, and the story collection Emerald City. Her stories have been published in The New Yorker, Harper's Magazine, GQ, Zoetrope, All-Story, and Ploughshares, and her non-fiction appears frequently in The New York Times Magazine. She lives with her husband and sons in Brooklyn.
GOR010511121
9781472150905
1472150902
Manhattan Beach by Jennifer Egan
Jennifer Egan
Used - Like New
Paperback
Little, Brown Book Group
2018-05-29
512
Winner of Andrew Carnegie Medal for Excellence in Fiction 2018 (UK) Short-listed for The Walter Scott Prize for Historical Fiction 2018 (UK) Long-listed for Women's Prize for Fiction 2018 (UK)
Book picture is for illustrative purposes only, actual binding, cover or edition may vary.
The book has been read, but looks new. The book cover has no visible wear, and the dust jacket is included if applicable. No missing or damaged pages, no tears, possible very minimal creasing, no underlining or highlighting of text, and no writing in the margins
Trustpilot