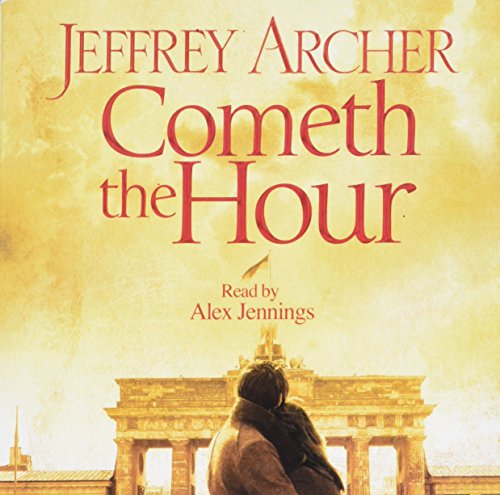 Cometh the Hour by Jeffrey Archer

The sixth and penultimate book in the spellbinding, number-one bestselling Clifton Chronicles.

Cometh the Hour by Jeffrey Archer

Cometh the Hour opens with the reading of a suicide note, which has devastating consequences for Harry and Emma Clifton, Giles Barrington and Lady Virginia.

Giles must decide if he should withdraw from politics and try to rescue Karin, the woman he loves, from behind the Iron Curtain. But is Karin truly in love with him, or is she a spy?

Lady Virginia is facing bankruptcy, and can see no way out of her financial problems, until she is introduced to the hapless Cyrus T. Grant III from Baton Rouge, Louisiana, who's in England to see his horse run at Royal Ascot.

Sebastian Clifton is now the Chief Executive of Farthings Bank and a workaholic, whose personal life is thrown into disarray when he falls for Priya, a beautiful Indian girl. But her parents have already chosen the man she is going to marry. Meanwhile, Sebastian's rivals Adrian Sloane and Desmond Mellor are still plotting to bring him and his chairman Hakim Bishara down, so they can take over Farthings.

Harry Clifton remains determined to get Anatoly Babakov released from a gulag in Siberia, following the international success of his acclaimed book, Uncle Joe. But then something unexpected happens that none of them could have anticipated.

Cometh the Hour is the penultimate book in the Clifton Chronicles and, like the five previous novels - all of which went to number one on the Sunday Times bestseller list - showcases Jeffrey Archer's extraordinary storytelling with his trademark twists.

Archer continues his storytelling magic to create characters of spellbinding substance, and readers can count on his surprising twists and shocking conclusion. Here, just when the end seems too tidy, Archer provides a killer cliffhanger * Publishers Weekly *
Jeffrey Archer, whose novels and short stories include Kane and Abel, A Prisoner of Birth and Cat O' Nine Tales, has topped the bestseller lists around the world, with sales of over 275 million copies. He is the only author ever to have been a number one bestseller in fiction, short stories and non-fiction (The Prison Diaries). The author is married to Dame Mary Archer, and they have two sons, two grandsons and a granddaughter.
GOR007482179
9781509817733
1509817735
Cometh the Hour by Jeffrey Archer
Jeffrey Archer
The Clifton Chronicles
Used - Very Good
Hardback
Pan Macmillan
2016-02-25
Short-listed for Parliamentary Book Awards Best Fiction 2016 (UK)
Book picture is for illustrative purposes only, actual binding, cover or edition may vary.
This is a used book - there is no escaping the fact it has been read by someone else and it will show signs of wear and previous use. Overall we expect it to be in very good condition, but if you are not entirely satisfied please get in touch with us
Trustpilot