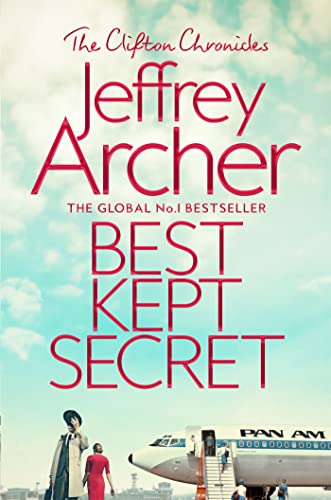 It is 1945 and the House of Lords' vote on who should inherit the Barrington estate ends in a tie, casting a long shadow on the lives of those involved.

Author Harry begins to promote his novel, whilst Emma, after her father's mysterious death, searches for the girl found abandoned in his office on the night he died.

Politician Giles defends his seat in the House of Commons and finds not only his future but his family's fortune at stake. Ultimately his fate is dictated by Harry's son Sebastian, even as Sebastian himself becomes embroiled in an international art fraud.

As they move out of the shadows of war, a new generation of Cliftons and Barringtons comes to the fore, and a thrilling new episode of Jeffrey Archer's captivating family saga begins.

Probably the greatest storyteller of our age * Mail on Sunday *
If there was a Nobel Prize for storytelling, Archer would win * Daily Telegraph *

Jeffrey Archer, whose novels and short stories include the Clifton Chronicles, Kane and Abel and Cat O' Nine Tales, is one of the world's favourite storytellers and has topped the bestseller lists around the world in a career spanning four decades. His work has been sold in 97 countries and in more than 37 languages. He is the only author ever to have been a number one bestseller in fiction, short stories and non-fiction (The Prison Diaries).

Jeffrey is also an art collector, sports lover, and amateur auctioneer, conducting numerous charity auctions every year. A member of the House of Lords for over a quarter of a century, the author is married to Dame Mary Archer, and they have two sons, two grandsons and a granddaughter.

GOR010284451
9781509847532
1509847537
Best Kept Secret by Jeffrey Archer
Jeffrey Archer
The Clifton Chronicles
Used - Very Good
Paperback
Pan Macmillan
2019-07-23
480
N/A
Book picture is for illustrative purposes only, actual binding, cover or edition may vary.
This is a used book - there is no escaping the fact it has been read by someone else and it will show signs of wear and previous use. Overall we expect it to be in very good condition, but if you are not entirely satisfied please get in touch with us
Trustpilot