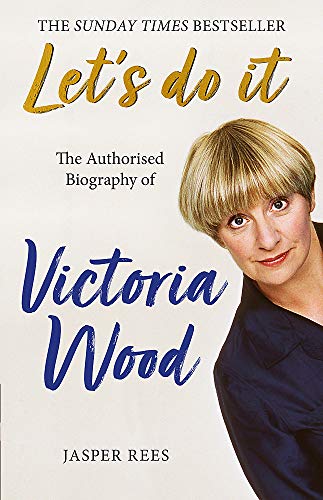 Let's Do It: The Authorised Biography of Victoria Wood by Jasper Rees

Written with the help of her family and closest friends - including Julie Walters, Dawn French, Celia Imrie and many others - this is the definitive authorised biography of one of Britain's most talented and loved entertainers: Victoria Wood.

Let's Do It: The Authorised Biography of Victoria Wood by Jasper Rees

'I was born with a warped sense of humour and when I was carried home from being born it was Coronation Day and so I was called Victoria but you are not supposed to know who wrote this anyway it is about time I unleashed my pent-up emotions in a bitter comment on the state of our society but it's not quite me so I think I shall write a heart-warming story with laughter behind the tears and tears behind the laughter which means hysterics to you Philistines...'
From 'Pardon?' by Vicky Wood, Aged 14. Bury Grammar School (Girls) Magazine, 1967

In her passport Victoria Wood listed her occupation as 'entertainer' - and in stand-up and sketches, songs and sitcom, musicals and dramas, she became the greatest entertainer of the age. Those things that might have held her back - her lonely childhood, her crippling shyness and above all the disadvantage of being a woman in a male-run industry - she turned to her advantage to make extraordinary comedy about ordinary people living ordinary lives in ordinary bodies. She wasn't fond of the term, but Victoria Wood truly was a national treasure - and her loss is still keenly felt.

Victoria had plenty of stories still to tell when she died in 2016, and one of those was her own autobiography.

'I will do it one day,' she told the author and journalist Jasper Rees. 'It would be about my childhood, about my first few years in showbusiness, which were really interesting and would make a really nice story.'

That sadly never came to pass, so Victoria's estate has asked Jasper Rees, who interviewed her more than anyone else, to tell her extraordinary story in full. He has been granted complete and exclusive access to Victoria's rich archive of personal and professional material, and has conducted over 200 interviews with her family, friends and colleagues - among them Victoria's children, her sisters, her ex-husband Geoffrey Durham, Julie Walters, Celia Imrie, Dawn French, Anne Reid, Imelda Staunton and many more.

What emerges is a portrait of a true pioneer who spoke to her audience like no one before or since.

Victoria Wood was a writer, actor, director, singer, composer and stand-up comedian. She first appeared on national television in 1974 on the talent show New Faces, and her debut stage play Talent was televised in 1979. In the 1980s her sketch show Wood and Walters was followed by the pioneering Victoria Wood As Seen on TV, which won four BAFTAs. As a stand-up performer she won two more BAFTAs for An Audience with Victoria Wood and, in the course of several national tours, sold out the Royal Albert Hall forty times. The 1990s brought more acclaim with the TV film Pat and Margaret and the canteen sitcom dinnerladies. In the following decade her much loved soap parody Acorn Antiques became a West End musical, while the wartime drama Housewife, 49 won two more BAFTAs. She filmed her stage musical That Day We Sang for television in 2014. Given an OBE in 1997, she was appointed a CBE in 2008. Since her death in 2016 at the age of 62, her work has continued to pulse through the British bloodstream.

Jasper Rees is an arts journalist and author who has written for the Daily Telegraph, Sunday Times and theartsdesk.com, which he co-founded. Previous books include I Found My Horn and Bred of Heaven, both of which were abridged for Radio 4's Book of the Week, and most recently a biography of Florence Foster Jenkins.

GOR010918412
9781409184096
1409184099
Let's Do It: The Authorised Biography of Victoria Wood by Jasper Rees
Jasper Rees
Used - Very Good
Hardback
Orion Publishing Co
2020-10-15
592
N/A
Book picture is for illustrative purposes only, actual binding, cover or edition may vary.
This is a used book - there is no escaping the fact it has been read by someone else and it will show signs of wear and previous use. Overall we expect it to be in very good condition, but if you are not entirely satisfied please get in touch with us
Trustpilot