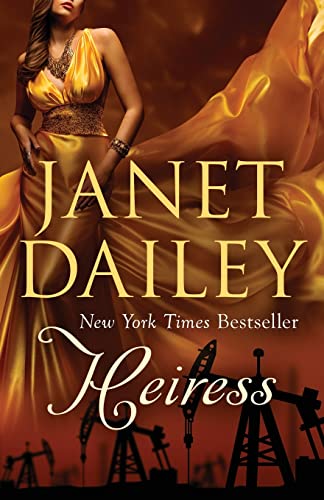 New York Times Bestseller: Two Texan half sisters battle over their father's fortune, risking their relationships with the men who love them.

Standing over her father's coffin, Abbie Lawson wonders if he ever actually loved her. Yes, he'd given her wealth, a place in the top echelon of Houston society, and horses-a farm full of Arabians-but not his attention. On those important family occasions, he was always away on business in California. And then Abbie sees why . . .

On the fringe of the crowd of mourners at the funeral is a woman whose face nearly mirrors her own-a second daughter. And, as if that betrayal isn't enough, she discovers that her father has left his money to the interloper. Abbie has the Arabians, but not the money to support them. As she witnesses her rival's rise in the Texas social scene, a tall, rough-hewn oil man named MacCrea Wilder enters her life. She doesn't need the distraction, but there's something about his sinewy arms that keeps her mind circling back to his kiss. Yet, as the years pass, even love may be sacrificed to the bitterness between these two women.

With over 300 million books sold, Janet Dailey is one of the great names in fiction. In Heiress, she tells the story of half sisters trapped in a bitter rivalry, providing the solid entertainment that made her famous (Publishers Weekly).
Janet Dailey, who passed away in 2013, was born Janet Haradon in 1944 in Storm Lake, Iowa. She attended secretarial school in Omaha, Nebraska, before meeting her husband, Bill. The two worked together in construction and land development until they retired to travel throughout the United States, inspiring Janet to write the Americana series of romances, setting a novel in every state of the Union. In 1974, Janet Dailey was the first American author to write for Harlequin. Her first novel was No Quarter Asked. She has gone on to write approximately ninety novels, twenty-one of which have appeared on the New York Times bestseller list. She won many awards and accolades for her work, appearing widely on radio and television. Today, there are over three hundred million Janet Dailey books in print in nineteen different languages, making her one of the most popular novelists in the world. For more information about Janet Dailey, visit www.janetdailey.com.
NLS9781497639362
9781497639362
1497639360
Heiress by Janet Dailey
Janet Dailey
New
Paperback
Open Road Media
2014-06-10
492
N/A
Book picture is for illustrative purposes only, actual binding, cover or edition may vary.
This is a new book - be the first to read this copy. With untouched pages and a perfect binding, your brand new copy is ready to be opened for the first time
Trustpilot