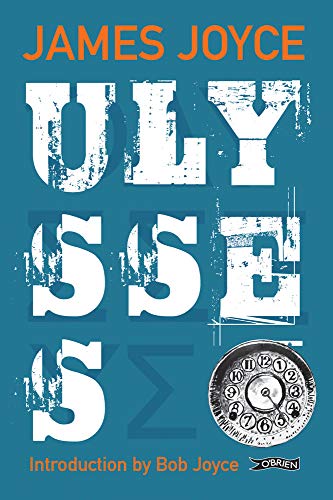 The Dublin Illustrated Edition of Ulysses, endorsed by The James Joyce Centre, meticulously recreates the 1922 text.

The unique Dublin Illustrated Edition, endorsed by The James Joyce Centre, meticulously recreates the 1922 text, and has been published to celebrate the Global Bloomsday Gathering, a live online reading of Ulysses which starts on 15 June 2013 at the James Joyce centre.

Ulysses chronicles the passage of Leopold Bloom through Dublin during an ordinary day, 16 June 1904. Ulysses' stream-of-consciousness technique, careful structuring, and experimental prose-full of puns, parodies, and allusions, as well as its rich characterisations and broad humour, made the book a highly regarded novel in the Modernist pantheon. In 1998, the Modern Library ranked Ulysses first on its list of the 100 best English-language novels of the 20th century.

very agreeable and pleasing to handle

[the illustrations] are homely and quite evocative representations that do not overshadow the text ... they are actually company for the reader and leave room for the imagination to breathe freely

given that Ulysses has been so commented on and the text even messed about with in some editions, many will be glad of the opportunity to read the book as Joyce intended

-- Books Ireland
James Joyce (1882-1941) is regarded as one of the most influential and important authors of the twentieth century. After graduating from University College Dublin, Joyce went to Paris. During World War One, Joyce and Barnacle, and their two children, Giorgio and Lucia, moved to Zurich where Joyce began Ulysses. He returned to Paris for two decades, and his reputation as an avant-garde writer grew. Joyce's works include the short story collection Dubliners (1914); novels A Portrait of the Artist as a Young Man (1916), Ulysses (1922) and Finnegans Wake (1939); two poetry collections Chamber Music (1907) and Pomes Penyeach (1927); and one play, Exiles (1918). Every year on 16 June, Joyceans across the globe celebrate Bloomsday, the day on which the action of Ulysses took place, proving Joyce's importance to literature. Bob Joyce is a grand-nephew of James Joyce, and is on the board of the James Joyce Centre in Dublin. Emma Byrne is a graphic designer and artist. She is a graduate of Central Saint Martins School of Art and Design. She has won numerous awards for her design including The IDI (Irish Design Institute) Graduate Designer of the Year, the IDI Promotional Literature Award for her work on Brown Morning, and a Children's Books Ireland Bisto Merit Award for her work on Something Beginning With P: New Poems from Irish Poets. She has illustrated many books, including Best-Loved Oscar Wilde, Best Loved Yeats, The Most Beautiful Letter in the World by Karl O'Neill, a special edition of Ulysses by James Joyce, and A Terrible Beauty by Mairead Ashe Fitzgerald. She lives in a thatched house in Co. Wexford.
GOR005793673
9781847175908
1847175902
Ulysses by James Joyce
James Joyce
Used - Very Good
Hardback
O'Brien Press Ltd
2013-05-15
1056
N/A
Book picture is for illustrative purposes only, actual binding, cover or edition may vary.
This is a used book - there is no escaping the fact it has been read by someone else and it will show signs of wear and previous use. Overall we expect it to be in very good condition, but if you are not entirely satisfied please get in touch with us
Trustpilot