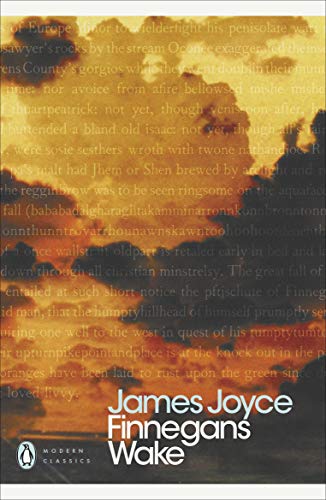 Follows a man's thoughts and dreams during a single night.

A daring work of experimental, Modernist genius, James Joyce's Finnegans Wake is one of the greatest literary achievements of the twentieth century, and the crowning glory of Joyce's life. The Penguin Modern Classics edition of includes an introduction by Seamus Deane

'riverrun, past Eve and Adam's, from swerve of shore to bend of bay, brings us by a commodius vicus of recirculation back to Howth Castle and Environs'

Joyce's final work, Finnegan's Wake is his masterpiece of the night as Ulysses is of the day. Supreme linguistic virtuosity conjures up the dark underground worlds of sexuality and dream. Joyce undermines traditional storytelling and all official forms of English and confronts the different kinds of betrayal - cultural, political and sexual - that he saw at the heart of Irish history. Dazzlingly inventive, with passages of great lyrical beauty and humour, Finnegans Wake remains one of the most remarkable works of the twentieth century.

James Joyce (1882-1941), the eldest of ten children, was born in Dublin, but exiled himself to Paris at twenty as a rebellion against his upbringing. He only returned to Ireland briefly from the continent but Dublin was at heart of his greatest works, Ulysses and Finnegans Wake. He lived in poverty until the last ten years of his life and was plagued by near blindness and the grief of his daughter's mental illness.

If you enjoyed Finnegans Wake, you might like Virginia Woolf's The Waves, also available in Penguin Classics.

'An extraordinary performance, a transcription into a miniaturized form of the whole western literary tradition'
Seamus Deane

James Joyce was born in Dublin on 2 February 1882, the eldest of ten children in a family which, after brief prosperity, collapsed into poverty. He was none the less educated at the best Jesuit schools and then at University College, Dublin, and displayed considerable academic and literary ability. Although he spent most of his adult life outside Ireland, Joyce's psychological and fictional universe is firmly rooted in his native Dublin, the city which provides the settings and much of the subject matter for all his fiction. He is best known for his landmark novel Ulysses (1922) and its controversial successor Finnegans Wake (1939), as well as the short story collection Dubliners (1914) and the semi-autobiographical novel A Portrait of the Artist as a Young Man (1916). James Joyce died in Zurich, on 13 January 1941.
GOR003455118
9780141183114
014118311X
Finnegans Wake by James Joyce
James Joyce
Penguin Modern Classics
Used - Well Read
Paperback
Penguin Books Ltd
2000-06-29
688
N/A
Book picture is for illustrative purposes only, actual binding, cover or edition may vary.
This is a used book. We do our best to provide good quality books for you to read, but there is no escaping the fact that it has been owned and read by someone else previously. Therefore it will show signs of wear and may be an ex library book
Trustpilot