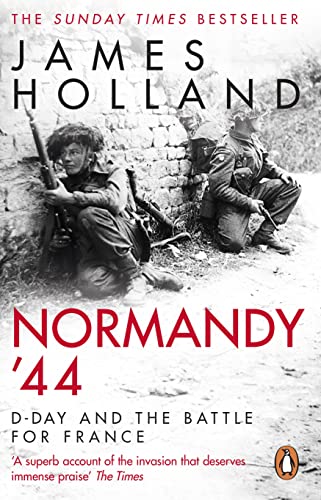 Normandy '44: D-Day and the Battle for France by James Holland

'A superb account of the invasion that deserves immense praise. To convey the human drama of Normandy requires great knowledge and sensitivity. Holland has both in spades' The Times

Renowned World War Two historian James Holland presents an entirely new perspective on one of the most important moments in recent history, unflinchingly examining the brutality and violence that characterised the campaign, and totally recalibrating our understanding of this momentous event.

D-Day and the 76 days of bitter fighting in Normandy that followed have come to be seen as a defining episode in the Second World War. Its story has been endlessly retold, and yet it remains a narrative burdened by both myth and assumed knowledge.

In this reexamined history, James Holland challenges what we think we know. Drawing on unseen archives and testimonies from around the world, introducing a cast of eye-witnesses from foot soldiers to bomber crews, sailors, civilians and resistance fighters.

As an account of this mighty and vitally significant clash of armies, Normandy '44 stands as richly impressive, hard to surpass * William Boyd, TImes Literary Supplement *
A superb account of the invasions that deserves immense praise...To convey the human drama of Normandy requires great knowledge and sensitivity. Holland has both in spades * The Times *
An invigorating new history of the Allied invasion of France * Strong Words Magazine *
A readable account of one of the 20th century's most defining battles provides a strategic overview enlivened by personal accounts of the horror ... for the general reader there are plenty of surprises * The i *
An impressive new account of D-Day ... Holland knows his stuff when it comes to military matters ... he reads the minds of the generals, their tactics, their blunders - on both sides * Daily Mail *

James Holland is an internationally acclaimed and award-winning historian, writer, and broadcaster. The author of a number of best-selling histories including Battle of Britain, Dam Busters, Burma '44 and, most recently, Big Week, he has also written nine works of historical fiction, including the Jack Tanner novels.

He is currently writing an acclaimed three-volume new history of the Second World War, The War in the West. He has presented - and written - many television programmes and series for the BBC, Channel 4, National Geographic, History and Discovery Channels.

He is also co-founder of the Chalke Valley History Festival and co-founder of WarGen.org, an online Second World War resource site, and presents the Chalk Valley History Hit podcast. A fellow of the Royal Historical Society, he also has a weekly podcast with Al Murray, We Have Ways of Making You Talk: Al Murray and James Holland Talk World War II. He can be found on Twitter as @James1940.

GOR010812020
9780552176118
0552176117
Normandy '44: D-Day and the Battle for France by James Holland
James Holland
Used - Very Good
Paperback
Transworld Publishers Ltd
2020-06-10
864
N/A
Book picture is for illustrative purposes only, actual binding, cover or edition may vary.
This is a used book - there is no escaping the fact it has been read by someone else and it will show signs of wear and previous use. Overall we expect it to be in very good condition, but if you are not entirely satisfied please get in touch with us
Trustpilot