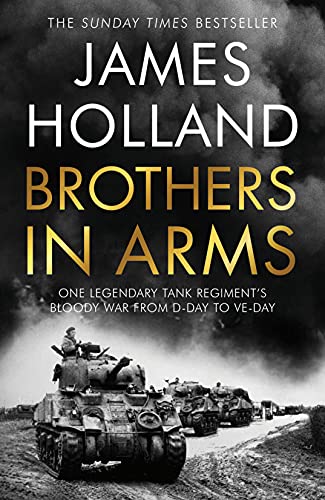 Brothers in Arms by James Holland

Brothers in Arms: One Legendary Tank Regiment's Bloody War from D-Day to VE-Day by James Holland

From the bestselling author of Normandy '44 and Sicily '43, a brilliant new history of the last days of the war

'Seldom is war so vividly described...An assault on the senses...Painful to read, impossible to put down' Gerard DeGroot, The Times

It took a certain type of courage to serve in a tank in the Second World War. Encased in steel, surrounded by highly explosive shells, a big and slow-moving target, every crew member was utterly vulnerable to enemy attack from all sides. Living - and dying - in a tank was a brutal way to fight a war.

The Sherwood Rangers were one of the great tank regiments. They had learned their trade the hard way, in the burning deserts of North Africa. From D-Day onwards, they were in the thick of the action til the war's end. They and their Sherman tanks covered thousands of miles and endured some of the fiercest fighting in Western Europe. Their engagements stretch from the Normandy beaches to the bridges at Eindhoven. They were the first British unit into Germany, grinding across the Siegfried Line and on into the Nazi heartland.

Through compelling eye-witness testimony and James Holland's expert analysis, Brothers In Arms brings to vivid life the final bloody scramble across Europe and gives the most powerful account to date of what it was really like to fight in the dying days of World War Two.

War as it should be described - ordinary men facing extraordinary horror. Caught in the drama of battle, we sometimes forget the good men who died. Holland, to his credit, forces us to remember -- Gerard DeGroot * The Times BOOK OF THE WEEK *
Their [the Sherwood Rangers] story can be seen as a reflection of the British war as a whole and Holland tells it very well, using his trademark technique of immersive detail and a cast of well-defined characters. If you are a fan of his style and I am, you will find that once again it works brilliantly -- Patrick Bishop * Daily Telegraph *

James Holland is a historian, writer and broadcaster. The author of a number of bestselling histories, including Battle of Britain, Dam Busters, Normandy '44 and, most recently, Sicily '43, he has also written nine works of historical fiction, including the Jack Tanner novels.

He is currently writing an acclaimed three-volume new history of the Second World War, The War in the West. He has presented - and written - a large number of television programmes and series for the BBC, Channel 4, National Geographic, and the History and Discovery channels.

A three-part documentary series based on his bestselling book Normandy '44 under the same title can be found on Amazon Prime.

James is co-founder of the Chalke Valley History Festival and of WarGen.org, an online Second World War resource site, and presents the Chalke Valley History Hit podcast. He also presents We Have Ways of Making You Talk, a podcast with Al Murray in which they discuss the Second World War. A fellow of the Royal Historical Society, he can be found on Twitter and Instagram as @James1940.

GOR011759465
9781787633940
1787633942
Brothers in Arms: One Legendary Tank Regiment's Bloody War from D-Day to VE-Day by James Holland
James Holland
Used - Very Good
Hardback
Transworld Publishers Ltd
20210930
592
N/A
Book picture is for illustrative purposes only, actual binding, cover or edition may vary.
This is a used book - there is no escaping the fact it has been read by someone else and it will show signs of wear and previous use. Overall we expect it to be in very good condition, but if you are not entirely satisfied please get in touch with us
Trustpilot