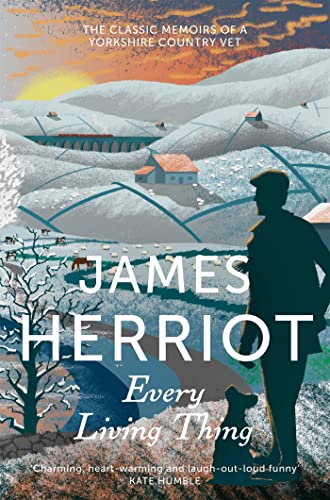 Every Living Thing by James Herriot

Every Living Thing: The Classic Memoirs of a Yorkshire Country Vet by James Herriot

The fifth volume of memoirs from the author who inspired the BBC series All Creatures Great and Small.

During his decades spent as a country vet in Yorkshire, James Herriot has seen huge advances in medical science, technological leaps, and a world irrevocably changed by war. Yet some things have always stayed the same - gruff farmers, hypochondriac pet owners, and animals that never do quite what you expect them to. From a green young man in his first job in the 1930s, to an experienced veterinary surgeon, married with two children, James has spent his entire career among the people and animals of Darrowby. And there's nowhere else he'd rather be.

Since they were first published, James Herriot's memoirs have sold millions of copies and entranced generations of animal lovers. Charming, funny and touching, Every Living Thing is a heart-warming story of determination, love and companionship from one of Britain's best-loved authors.

James Herriot grew up in Glasgow and qualified as a veterinary surgeon at Glasgow Veterinary College. Shortly afterwards he took up a position as an assistant in a North Yorkshire practice where he remained, with the exception of his wartime service in the RAF, until his death in 1995. He wrote many books about Yorkshire country life, including some for children, but he is best known for his memoirs, beginning with If Only They Could Talk. The books were televised in the enormously popular series All Creatures Great and Small.
GOR004666723
9781447226086
1447226089
Every Living Thing: The Classic Memoirs of a Yorkshire Country Vet by James Herriot
James Herriot
Used - Very Good
Paperback
Pan Macmillan
2013-01-17
448
N/A
Book picture is for illustrative purposes only, actual binding, cover or edition may vary.
This is a used book - there is no escaping the fact it has been read by someone else and it will show signs of wear and previous use. Overall we expect it to be in very good condition, but if you are not entirely satisfied please get in touch with us
Trustpilot