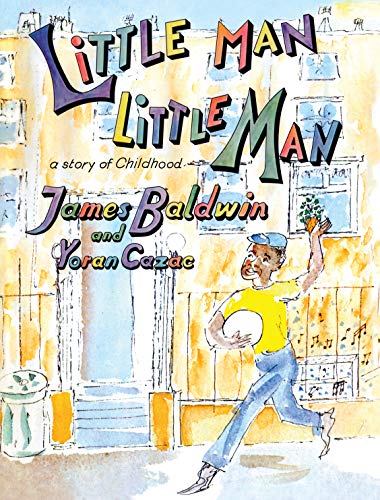 Now available for the first time in nearly forty years, James Baldwin's only children's book Little Man, Little Man follows the day to day life of the four year old protagonist TJ and his friends in their 1970s Harlem neighborhood as they encounter the social realities of being black in America.

Four-year-old TJ spends his days on his lively Harlem block playing with his best friends WT and Blinky and running errands for neighbors. As he comes of age as a Little Man with big dreams, TJ faces a world of grown-up adventures and realities. Baldwin's only children's book, Little Man, Little Man celebrates and explores the challenges and joys of black childhood.

Yoran Cazac (1938-2005) was a French artist who first gained attention for his abstract paintings in Paris in the 1960s. He moved to Rome, where he became the protege of the painter Balthus, director of the French Academy. Cazac met Baldwin in Paris in 1959 through their mutual friend, painter Beauford Delaney. They rekindled their friendship in the 1970s, when Baldwin asked Cazac to provide the illustrations for Little Man, Little Man. Baldwin contributed an essay for the catalog of Cazac's 1977 exhibition at the Chateau de Maintenon. Cazac's final solo exhibition was held at the Kiron Gallery in Paris in 2003.

Jennifer DeVere Brody is Professor of Theater and Performance Studies at Stanford University.

Aisha Karefa-Smart, James Baldwin's niece, is an author who lives in Washington, D.C.
Acknowledgments
Foreword / Tejan Karefa-Smart
Introduction / Nicholas Boggs and Jennifer DeVere Brody
Little Man, Little Man
Afterword / Aisha Karefa-Smart
CIN001133699
9781478000044
147800004X
Little Man, Little Man: A Story of Childhood by James Baldwin
James Baldwin
Used - Very Good
Hardback
Duke University Press
20180824
120
N/A
Book picture is for illustrative purposes only, actual binding, cover or edition may vary.
This is a used book - there is no escaping the fact it has been read by someone else and it will show signs of wear and previous use. Overall we expect it to be in very good condition, but if you are not entirely satisfied please get in touch with us
Trustpilot