Red at the Bone Jacqueline Woodson 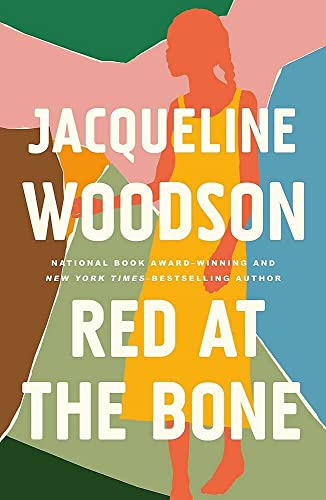 Red at the Bone by Jacqueline Woodson

An extraordinary new novel about the influence of history on a contemporary family, from the author of Another Brooklyn and Brown Girl Dreaming.

Red at the Bone: Longlisted for the Women's Prize for Fiction 2020 by Jacqueline Woodson

'Will remind you why you love reading' Stylist (Best New Books for 2020)
'Sublime... will strike you in the heart' Candice Carty-Williams, author of Queenie
'Profound, moving and consistently unexpected... Pure poetry' Observer
'A true spell of a book' Ocean Vuong, author of On Earth We Are Briefly Gorgeous
'A sharply focused gem' Sunday Times
'An epic in miniature' Tayari Jones, author of An American Marriage
'Dazzling... With urgent, vital insights into questions of class, gender, race, history, queerness and sex' New York Times
'A banger' Ta-Nehisi Coates, author of The Water Dancer

An unexpected teenage pregnancy brings together two families from different social classes, and exposes the private hopes, disappointments and longings that can bind or divide us.
From the New York Times-bestselling and National Book Award-winning author of Another Brooklyn and Brown Girl Dreaming.

Brooklyn, 2001. It is the evening of sixteen-year-old Melody's coming of age ceremony in her grandparents' brownstone. Watched lovingly by her relatives and friends, making her entrance to the music of Prince, she wears a special custom-made dress - the very same dress that was sewn for a different wearer, Melody's mother, for a celebration that ultimately never took place.

Unfurling the history of Melody's family - from the 1921 Tulsa race massacre to post 9/11 New York - Red at the Bone explores sexual desire, identity, class, and the life-altering facts of parenthood, as it looks at the ways in which young people must so often make fateful decisions about their lives before they have even begun to figure out who they are and what they want to be.

[Jacqueline Woodson's] books combine unique details of her characters' lives with the sounds, sights and especially music of their surroundings, creating stories that are both deeply personal and remarkably universal....this lyrical, lightly told coming-of-age story is bound to satisfy.

* BookPage *
Jacqueline Woodson has a gift for finding the perfect sets of details and poetic turns of phrase to make her novels feel epic and expansive. * Pacific Standard *

PRAISE FOR JACQUELINE WOODSON
Jacqueline Woodson has such an original vision, such a singular voice.

* Ann Patchett *
Woodson brings the reader so close to her young characters that you can smell the bubble gum on their breath and feel their lips as they brush against your ear. * Tayari Jones, Women's Prize-winning author of AN AMERICAN MARRIAGE *
Intense, moving . . . reading more like prose poetry than traditional narrative, the novel unfolds as memory does, in burning flashes, thick with detail. * New York Times *
Woodson explores class, race and death with unflinching honesty and emotional depth... She manages to remember what cannot be documented, to suggest what cannot be said. * Washington Post *
Woodson writes lyrically about what it means to be a girl in America, and what it means to be black in America. * Huffington Post *
One of the quietly great masters of our time. * Kirkus *
Woodson does for young black girls what short story master Alice Munro does for poor rural ones: she imbues their everyday lives with significance. * Elle *
Woodson makes us want to reach into the mirror she holds up and make the words and the worlds she explores our own. * New York Times Book Review *
A gorgeous writer... Lyrical prose, really, really beautiful. * Emma Straub *
A master storyteller. * Angela Flournoy *
Jacqueline Woodson has a poet's soul and a poet's eye for image and ear for lyrical language... I'll go anywhere she leads me. * Naomi Jackson *
Black women and their sexuality - what is projected on to it; its weight, beauty and ease - are at the heart of Red at the Bone. Woodson seems to understand that there has never been a way for youth or love or desire to play it safe. A young girl's sexuality is hers to discover, and not her parents', nor her lovers', to assume or take away. It is the mystery that keeps unravelling, like blood, truth and memory. * The Guardian *

'It is rare to read an American novel that talks so unsqueamishly about class, and the systems - from the well-intentioned to the malignantly racist - that stymie upward mobility in black communities. It is rarer still to read a novel of unpunished maternal reluctance... It is in telling Iris's story - not as one of callous abandonment but of self-protection and queer desire - that Woodson's novel shows its red-raw heart'

* TLS *
Jacqueline Woodson is the author of more than two dozen award-winning books, including the 2016 New York Times-bestselling National Book Award finalist for adult fiction, Another Brooklyn. Among her many accolades, Woodson is a four-time National Book Award finalist, a four-time Newbery Honor winner, a two-time NAACP Image Award winner and a two-time Coretta Scott King Award winner. Her New York Times-bestselling memoir, Brown Girl Dreaming, received the National Book Award in 2014. Woodson is also the 2018-2019 National Ambassador for Young People's LIterature and recipient of the 2018 Astrid Lindgren Memorial Award and the 2018 Children's Literature Legacy Award. In 2015 she was named the Young People's Poet Laureate by the Poetry Foundation. She lives with her family in New York.
GOR010508912
9781474616430
1474616437
Red at the Bone: Longlisted for the Women's Prize for Fiction 2020 by Jacqueline Woodson
Jacqueline Woodson
Used - Like New
Hardback
Orion Publishing Co
2020-01-23
208
N/A
Book picture is for illustrative purposes only, actual binding, cover or edition may vary.
The book has been read, but looks new. The book cover has no visible wear, and the dust jacket is included if applicable. No missing or damaged pages, no tears, possible very minimal creasing, no underlining or highlighting of text, and no writing in the margins
Trustpilot