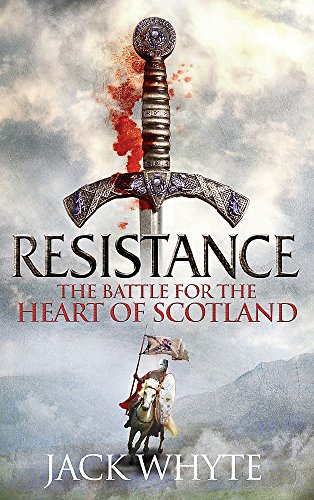 As modern Scotland chooses its future, Jack Whyte presents his epic adventure about its founding hero, Robert the Bruce, and the battle for the heart of his homeland.

Born to a divided kingdom. Destined to unite it.

AD 1286: The King of Scots is killed, leaving no heir. Twelve-year-old Robert Bruce, heir to the great House of Bruce, comes of age amid the bitter rivalry of Scotland's most powerful nobles to claim the vacant throne.

The boy is schooled in the arts of warfare and the manipulation of ruthless and violent men, but when the Scottish Crown is bestowed upon Bruce's greatest enemies, Robert travels with his family to England, swearing feudal loyalty to King Edward Plantagenet - known as 'Longshanks'.

But Longshanks's increasing treachery and his brutal attempts to annexe Scotland see Robert turning renegade and returning to his home country. The Battle of Bannockburn lies ahead and a legend is born.

This is the story of one man's resistance, and the bravery of a country that would not yield.

Jack Whyte was born and raised in Scotland, and educated in England and France
GOR005971480
9780751548907
0751548901
Resistance: The Bravehearts Chronicles by Jack Whyte
Jack Whyte
Bravehearts Chronicles
Used - Very Good
Paperback
Little, Brown Book Group
2014-07-29
672
N/A
Book picture is for illustrative purposes only, actual binding, cover or edition may vary.
This is a used book - there is no escaping the fact it has been read by someone else and it will show signs of wear and previous use. Overall we expect it to be in very good condition, but if you are not entirely satisfied please get in touch with us
Trustpilot