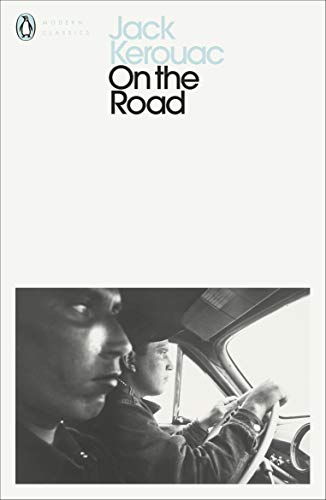 On the Road by Jack Kerouac

Sal Paradise, a young innocent, joins his hero Dean Moriarty, a traveller and mystic, the living epitome of Beat, on a breathless, exuberant ride back and forth across the United States. Their search for release or fulfilment through drink, sex, drugs and jazz becomes an exploration of personal freedom, a test of the limits of the American dream.

On the Road by Jack Kerouac

Sal Paradise (Sam Riley), a young innocent, joins his hero Dean Moriarty (Garrett Hedlund), a traveller and mystic, the living epitome of Beat, on a breathless, exuberant ride back and forth across the United States. Their hedonistic search for release or fulfilment through drink, sex, drugs and jazz becomes an exploration of personal freedom, a test of the limits of the American dream. A brilliant blend of fiction and autobiography, Jack Kerouac's exhilarating novel swings to the rhythms of 1950s underground America, racing towards the sunset with unforgettable exuberance, poignancy and autobiographical passion. One of the most influential and important novels of the 20th century, On the Road is the book that launched the Beat Generation and remains the bible of that literary movement.

'The most beautifully executed, the clearest and the most important utterance yet made by the
generation Kerouac himself named years ago as "beat"'
The New York Times

'Pop writing at its best. It changed the way I saw the world, making me yearn for fresh experience'
Hanif Kureishi, Independent on Sunday

'On the Road sold a trillion Levis and a million espresso machines, and also sent countless kids on the road'
William Burroughs

Jack Kerouac (1922 - 1969) was an American novelist, poet, artist and part of the Beat Generation. Most of his life was spent in the vast landscapes of America or living with his mother, with whom he spent most of his life. Kerouac's best known works are On the Road and The Dharma Bums.

Ann Charters, professor of English at the University of Connecticut, has been interested in Beat writers since 1956, when as an undergraduate English major she attended the repeat performance of the Six Gallery poetry reading in Berkeley where Allen Ginsberg gave his sencond public reading of Howl. After his death she wrote the first Kerouac biography and edited his posthumous collection, Scattered Poems. She was the general editor of the two-volume encyclopaedia The Beats: Literary Bohemians In Postwar America and has published a collection of her photographic portraits of well-known writers in the book Beats & Company.

GOR001260797
9780141182674
0141182679
On the Road by Jack Kerouac
Jack Kerouac
Used - Very Good
Paperback
Penguin Books Ltd
2000-02-24
320
Runner-up for The BBC Big Read Top 100 2003 Short-listed for BBC Big Read Top 100 2003
Book picture is for illustrative purposes only, actual binding, cover or edition may vary.
This is a used book - there is no escaping the fact it has been read by someone else and it will show signs of wear and previous use. Overall we expect it to be in very good condition, but if you are not entirely satisfied please get in touch with us
Trustpilot