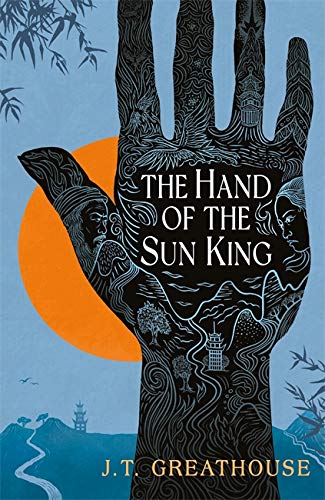 The Hand of the Sun King by J.T. Greathouse

This debut fantasy kicks off the epic Pact and Pattern trilogy. Combining the intricate magic of Brent Weeks and the emotional heft of Robin Hobb, this is a novel about family and loyalty in the face of adversity.

The Hand of the Sun King: Book One by J.T. Greathouse

'A great coming of age story about a foolish boy who seeks to unravel the secrets of magic and maybe do something good in the process. I absolutely loved it' Nick Martell

All my life, I have been torn between two legacies: that of my father, whose roots trace back to the right hand of the Emperor. That of my mother's family, who reject the oppressive Empire and embrace the resistance.

I can choose between them - between protecting my family, or protecting my people - or I can search out a better path . . . a magical path, filled with secrets, unbound by empire or resistance, which could shake my world to its very foundation.

But my search for freedom will entangle me in a war between the gods themselves . . .

The first book in the Pact and Pattern series. Fans of Robin Hobb, Brandon Sanderson's Mistborn and R.F. Kuang's The Poppy War will love the magic running through every page.
Sublime prose and pin-sharp characterisation combine to produce a captivating epic of conflicted loyalties and dangerous ambition * Anthony Ryan, New York Times bestselling author *
A spellbinding debut with terrific characterisations, immersive world-building, and prose that swept me away . . . hands down the best debut of the year. Scratch that; this is one of the best debuts I've ever read * Novel Notions *
The Hand of the Sun King is not the gentle story of a boy's rise to power; instead, it digs its fingernails into the layers of an empire that would consume and erase half that boy's identity. Brilliantly told and immediately engrossing, filled with magic, mistakes, and their merciless consequences * Andrea Stewart, author of The Bone Shard Daughter *
A great coming of age story about a foolish boy who seeks to unravel the secrets of magic and maybe do something good in the process. I absolutely loved it * Nick Martell, author of Kingdom of Liars *
Well written, thought provoking and enjoyable, The Hand of the Sun King is an impressive debut novel that left me eager for more * Lisbeth Campbell, author of The Vanished Queen *
An original fantasy filled with magic and culture, the story of a character torn between two names, two loyalties, and two definitions of good and evil * Kevin J. Anderson, New York Times bestselling author of Spine of the Dragon *
Sometimes a book comes along that is truly special. J.T. Greathouse is about to take Patrick Rothfuss's crown with The Hand of the Sun King. It's a beautiful tale about someone trying to discover the magic within themselves, in a world where they'll never truly fit in. Be prepared to be swept along on a unique journey where the consequences of choice echo through an empire * Mike Shackle, author of We Are The Dead *
A coming-of-age narrative with the energy of a modern fantasy and the gravity of a classic, sure to hit with readers who like their prose vivid and their world-building lovingly textured * M.L. Wang, author of The Sword of Kaigen *
Exquisite . . . Greathouse's characterisation, his prose, and worldbuilding are an absolute triumph * The Fantasy Hive *
An excellent mix of classic and modern fantasy with a grimdark undertone of despair * Grimdark Magazine *
Set in a fantastical world of magic with a rich history, this novel fits beautifully into its genre while also addressing some failings of the genre by turning them on their head * Dawn Vogel, History That Never Was *
J.T. Greathouse's debut is going to make waves . . . without a doubt one of the best books I've read in a long time * Jon Ficke *
Wen Alder's pursuit for forbidden knowledge, while having to choose a future that will either make his parents proud or honor his legacy makes for an addicting journey full of magic * Clay Harmon *
An excellent debut * Aspects of Me *
A sublime debut fantasy novel set in a unique world that, through the eyes of Wen Alder, shares the delightful intricacies of world-building * Eternal Bookcase *
[The Hand of the Sun King] creates a rich and intricate world with magic, politics, ambition and resistance * Maria Haskins *
Loyalties relentlessly tested, weighty consequences, a cast of meaningful, well-developed characters, and a lush world that carefully considers its lore, economic struggles, and religious history, it's easy for me to call The Hand of the Sun King one of my top reads of 2021 * Fantasy Book Review *
A well-realised philosophical meditation sprinkled with fun and delightfully clever moments with a strong fantasy atmosphere * A Quill to Live *
A staggering fantasy debut with poetic prose and near-flawless characterisation * FanFiAddict *
J.T. Greathouse has been writing fantasy and science fiction since he was eleven years old. He holds a BA in history and philosophy with a minor in Asian studies as well as a Master's in Teaching from Whitworth University, and spent four months of intensive study in Chinese language and culture at Minzu University of China in Beijing. His short fiction has appeared, often as Jeremy A. TeGrotenhuis, in Beneath Ceaseless Skies, Writers of the Future 34, Deep Magic, Orson Scott Card's Intergalactic Medicine Show, and elsewhere. In addition to writing, he has worked as an ESL teacher in Taipei, as a bookseller at Auntie's Bookstore in Spokane, and as a high school teacher. He currently lives in Spokane, Washington with his wife Hannah and several overflowing bookshelves.
NGR9781473232877
9781473232877
1473232872
The Hand of the Sun King: Book One by J.T. Greathouse
J.T. Greathouse
Pact and Pattern
New
Hardback
Orion Publishing Co
20210805
416
N/A
Book picture is for illustrative purposes only, actual binding, cover or edition may vary.
This is a new book - be the first to read this copy. With untouched pages and a perfect binding, your brand new copy is ready to be opened for the first time
Trustpilot