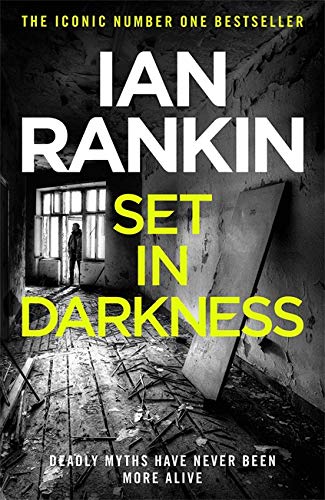 Set In Darkness by Ian Rankin

Set In Darkness by Ian Rankin

Edinburgh is about to become the home of the first Scottish parliament in 300 years. As political passions run high, DI John Rebus is charged with liaison, thanks to the new parliament being resident in Queensbury House, bang in the middle of his patch. But Queensbury House has its own, dark past.

Legend has it that a young man was roasted there on a spit by a madman. When the fireplace where the youth died is uncovered another more recent murder victim is found. Days later, in the gardens outside, there is another body and Rebus is under pressure to find instant answers.

As the case proceeds, the Inspector finds himself face to face with one of Edinburgh's most notorious criminals...

Born in the Kingdom of Fife in 1960, Ian Rankin graduated from the University of Edinburgh in 1982, and then spent three years writing novels when he was supposed to be working towards a PhD in Scottish Literature. His first Rebus novel was published in 1987, and the Rebus books are now translated into thirty-six languages and are bestsellers worldwide.Ian Rankin has been elected a Hawthornden Fellow, and is also a past winner of the Chandler-Fulbright Award. He is the recipient of four CWA Daggers including the prestigious Diamond Dagger in 2005. In 2004, Ian won America's celebrated Edgar Award. He has also been shortlisted for the Anthony Award in the USA, won Denmark's Palle Rosenkrantz Prize, the French Grand Prix du Roman Noir and the Deutscher Krimipreis. Ian Rankin is also the recipient of honorary degrees from the universities of Abertay, St Andrews, Edinburgh, Hull and the Open University.A contributor to BBC2's Newsnight Review, he also presented his own TV series, Ian Rankin's Evil Thoughts. Rankin is a No.1 bestseller in the UK and has received the OBE for services to literature, opting to receive the prize in his home city of Edinburgh, where he lives with his partner and two sons. www.ianrankin.net Twitter @Beathhigh
GOR001351221
9780752883632
0752883631
Set In Darkness by Ian Rankin
Ian Rankin
A Rebus Novel
Used - Very Good
Paperback
Orion Publishing Co
2008-08-07
496
N/A
Book picture is for illustrative purposes only, actual binding, cover or edition may vary.
This is a used book - there is no escaping the fact it has been read by someone else and it will show signs of wear and previous use. Overall we expect it to be in very good condition, but if you are not entirely satisfied please get in touch with us
Trustpilot