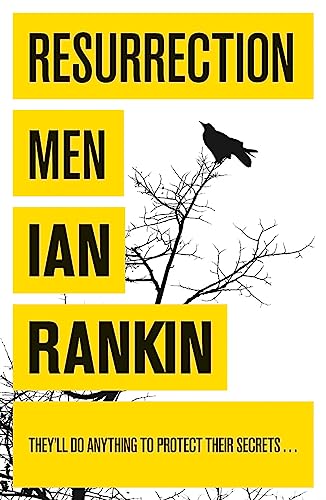 Rebus is off the case - literally. A few days into the murder inquiry of an Edinburgh art dealer, Rebus blows up at a colleague. He is sent to the Scottish Police College for 'retraining' - in other words, he's in the Last Chance Saloon.

Rebus is assigned to an old, unsolved case, but there are those in his team who have their own secrets - and they'll stop at nothing to protect them.

Rebus is also asked to act as a go-between for gangster 'Big Ger' Cafferty. And as newly promoted DS Siobhan Clarke works the case of the murdered art dealer, she is brought closer to Cafferty than she could ever have anticipated...

This is Rankin at his best, and, boy, that's saying something * TIME OUT *
Quite apart from their excellence as detective novels, every one of them adds something interesting to our understanding of the social landscape of Edinburgh, which Rankin portrays with such subtlety and sensitivity * THE TIMES *
As is usual with Rebus novels, the plot is so thick you could stand a spoon up in it ... Rankin's Rebus novels should be required reading for anyone whose knowledge of Edinburgh has been derived from visits to the Festival ... Rankin is still very much a Category A crime writer * SUNDAY TELEGRAPH *
Resurrection Men is Rebus's 13th outing, and it bears all the qualities that have established Rankin as one of Britain's leading novelists in any genre: a powerful sense of place; a redefinition of Scotland and its past; persuasive dialogue; and a growing compassion among its characters' * NEW STATESMAN *
As Ian Rankin and Inspector Rebus are regular visitors to the bestsellers list I see no reason why Resurrection Men should not follow that well-trodden path. All the Rankin virtues are present - compulsive readability, sharp dialogue, the believable pettiness of the police procedural background and, looming over the book as ever, the formidable presence of the Jekyll-and-Hyde city of Edinburgh. There is also, at times, a wonderful economy that can capture an entire atmosphere in a few words * DAILY MAIL *
Rankin is pretty much unrivalled at the vivid delineation of character. John Rebus, tormented, dogged, moral, his prickliness repelling those he most wants to attract, remains one of the great creations of modern mystery fiction. Resurrection Men is right up there with the best of this terrific series * OBSERVER *
In the Rebus books Rankin has created an Edinburgh that is textured, vivid, plausible, perhaps even real ... Even viewed solely as a whodunit, Resurrection Men stands some distance above the competition. Rankins juggles three tense and fascinating, apparently unrelated cases, each of which for a lesser writer would be a book in itself, before late in the novel drawing them together in a clever, unexpected but utterly convincing denouement * DAILY EXPRESS *
Rankin is a phenomenon. He has made Edinburgh an imaginary or rather fully imagined city as nobody, except Spark, has done since Stevenson ... With each book I find myself wondering if he can pull it off again; so far he has never failed. I would rather read Rankin than any other living Scottish writer except Muriel Spark and William McIlvanney ... They call his work crime fiction, but the adjective is superfluous ... these novels are totally absorbing. Once I start reading one, all else goes by the board till I have finished it -- Allan Massie * SPECTATOR *
The thirteenth novel in Rankin's Rebus series is his most mature work yet. His pacing is so acute and the supporting characters are so well drawn that this book escapes the shackles of the crime novel genre and can be classed as great fiction, full stop * TIMES PLAY *
Born in the Kingdom of Fife in 1960, Ian Rankin graduated from the University of Edinburgh in 1982, and then spent three years writing novels when he was supposed to be working towards a PhD in Scottish Literature. His first Rebus novel was published in 1987, and the Rebus books are now translated into thirty-six languages and are bestsellers worldwide.Ian Rankin has been elected a Hawthornden Fellow, and is also a past winner of the Chandler-Fulbright Award. He is the recipient of four CWA Daggers including the prestigious Diamond Dagger in 2005. In 2004, Ian won America's celebrated Edgar Award. He has also been shortlisted for the Anthony Award in the USA, won Denmark's Palle Rosenkrantz Prize, the French Grand Prix du Roman Noir and the Deutscher Krimipreis. Ian Rankin is also the recipient of honorary degrees from the universities of Abertay, St Andrews, Edinburgh, Hull and the Open University.A contributor to BBC2's Newsnight Review, he also presented his own TV series, Ian Rankin's Evil Thoughts. Rankin is a No.1 bestseller in the UK and has received the OBE for services to literature, opting to receive the prize in his home city of Edinburgh, where he lives with his partner and two sons. www.ianrankin.net Twitter @Beathhigh
GOR001640818
9780752883656
0752883658
Resurrection Men by Ian Rankin
Ian Rankin
A Rebus Novel
Used - Very Good
Paperback
Orion Publishing Co
2008-08-07
512
Winner of Edgar Allan Poe Awards: Best Paperback Original 2004 (UK)
Book picture is for illustrative purposes only, actual binding, cover or edition may vary.
This is a used book - there is no escaping the fact it has been read by someone else and it will show signs of wear and previous use. Overall we expect it to be in very good condition, but if you are not entirely satisfied please get in touch with us
Trustpilot