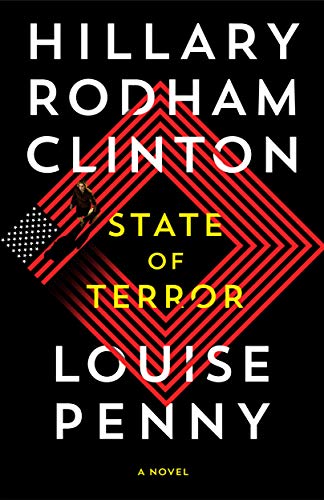 From the number one bestselling authors Hillary Clinton and Louise Penny comes a novel of unsurpassed thrills and incomparable insider expertise - State of Terror.

'Smart and fast and twisty, State of Terror is a dazzlingly unpredictable political thriller. I loved it' - Kathy Reichs

Take a ringside seat in the high-stakes world of international politics . . .

After a tumultuous period in American politics, a new administration has just been sworn in. Secretary of State, Ellen Adams, is determined to do her duty for her country. But she is about to face a horrifying international threat . . .

A young foreign service officer has received a baffling text from an anonymous source. Too late, she realizes it was a hastily coded warning. Then a series of bus bombs devastate Europe, heralding the rise of a new rogue terrorist organization who will stop at nothing in their efforts to develop their own nuclear arsenal.

As Ellen unravels the damaging effects of the former presidency on international politics, she must also contemplate the unthinkable: that the last president of the United States was more than just an ineffectual leader. Was he also a traitor to his country?

From the number one bestselling authors Hillary Clinton and Louise Penny comes a novel of unsurpassed thrills and incomparable insider expertise.

pretty darn good...the real appeal of the novel, apart from a fuel tanker's worth of political score-settling, is that this is as close as you'll get to being in the White House Situation Room with a secretary of state. * The Times *

* The Guardian *
I expected a thriller written by Hillary Rodham Clinton and Louise Penny to be smart, very well-written, and suspenseful . . . But State of Terror is so much more than that. Yes, this novel is a rip-roaring, brilliant page-turner, but it's also timely, cheeky, important, and wonderfully, courageously provocative. What great fun! -- James Patterson
State of Terror is an absolutely gripping, utterly believable, heart-stopping thriller that will make readers question how much is fiction and how much is based on reality. Clinton and Penny are each a force on their own - put together they are unstoppable -- Karin Slaughter
This is the perfect political thriller: rollercoaster action, credible heroes and villains, and a glimpse into the world of our most powerful politicians. Add into the mix flashes of humour and fine writing and we have a winning formula! -- Ann Cleeves
Hillary Clinton and Louise Penny Deliver a Page-Turner ... a romp...political junkies will relish the veiled insults to real-life people. ... I'm going to award the prize for Best Clinton Thriller of 2021 to Hillary. * New York Times *
Smart and fast and twisty, State of Terror is a dazzlingly unpredictable political thriller. I loved it -- Kathy Reichs
State of Terror moves at a galloping pace all the while offering tantalizing insight into the mind of the GOAT (greatest of all time) herself. Hillary Clinton and Louise Penny have written us some truly iconic women. We are not worthy! -- Jessica Knoll
One of the buzziest books this fall. * Washington Post *
Hillary Rodham Clinton pairs up with powerhouse mystery novelist Louise Penny for State of Terror, a political thriller full of action and intrigue...Clinton and Penny create a heart-pounding mystery about terrorism, corruption and diplomacy, meticulously written with the promise of details only someone on the inside could contribute. * Time *
[A] pulsating thriller. * People *
With combined expertise, Hillary Clinton and Louise Penny offer a story that is not only artfully written but also rich in its deep knowledge of the complicated global mess that is international politics. With each tick of the clock, the spring is more tightly wound, and readers will find themselves breathlessly expecting in every moment that in the next moment the worst will occur. But wisely and with expert craft, across page after page of heart-in-your-throat moments, these two collaborators draw the reader inevitably toward a truly surprising conclusion. State of Terror is a feast for thriller lovers. -- William Kent Krueger, author of Ordinary Grace
An inspired pairing. Penny's turn-the-page pacing and Clinton's wealth of insider details mesh perfectly in this fast, entertaining thriller that also has knowing things to say about national - and international - politics. So authentic it feels like eavesdropping. -- Joseph Kanon

Hillary Rodham Clinton is the first woman in US history to become the presidential nominee of a major political party. She served as the 67th Secretary of State after nearly four decades in public service advocating on behalf of children and families as an attorney, First Lady and US Senator. She is a wife, mother, grandmother and author of several books including State of Terror.

Louise Penny is an international award-winning and bestselling author whose books have hit number one on the New York Times, USA Today and Globe and Mail lists. Her Chief Inspector Armand Gamache novels, have been translated into thirty-one languages. In 2017, she received the Order of Canada for her contributions to Canadian culture. Louise Penny lives in a village south of Montreal.

NGR9781529079692
9781529079692
1529079691
State of Terror by Hillary Rodham Clinton
Hillary Rodham Clinton
New
Hardback
Pan Macmillan
2021-10-12
512
N/A
Book picture is for illustrative purposes only, actual binding, cover or edition may vary.
This is a new book - be the first to read this copy. With untouched pages and a perfect binding, your brand new copy is ready to be opened for the first time
Trustpilot