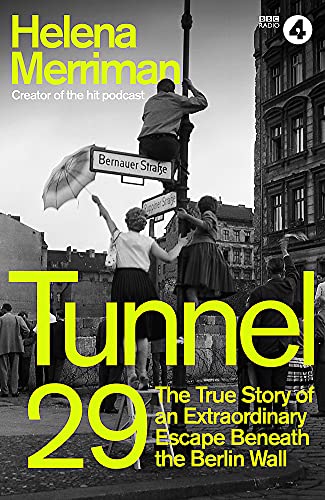 The true story of the most remarkable escape tunnel under the Berlin Wall, from the creator of the acclaimed BBC podcast.

Tunnel 29: Love, Espionage and Betrayal: the True Story of an Extraordinary Escape Beneath the Berlin Wall by Helena Merriman

'An almost unbelievable story of bravery, endeavour, and humanity... you won't be able to put it down.' Dermot O'Leary

'Merriman takes us inside not only the tunnel, but also the personal lives of those who dug it. We feel we're experiencing history as it happens. It's a gripping story of bravery, determination and, ultimately, love.' Lindsey Hillsum, International Editor for Channel 4 News

Acclaim for the TUNNEL 29 podcast:

'Combining the fun of a thriller that we know will end happily with grim perspective on history and tyranny... stunning.' New Yorker

'A truly exciting yarn... creates a sense for the listener of being right there in the tunnel, experiencing the dangers.' Observer

He's just escaped from one of the world's most brutal regimes.

Now, he decides to tunnel back in.

It's summer, 1962, and Joachim Rudolph, a student, is digging a tunnel under the Berlin Wall. Waiting on the other side in East Berlin - dozens of men, women and children; all willing to risk everything to escape.

From the award-winning creator of the acclaimed BBC Radio 4 podcast, Tunnel 29 is the true story of the most remarkable escape tunnel dug under the Berlin Wall. Drawing on hundreds of hours of interviews with the survivors, and thousands of pages of Stasi documents, Helena Merriman brilliantly reveals the stranger-than-fiction story of the ingenious group of student-diggers, the glamorous red-haired messenger, the American News network which films the escape, and the Stasi spy who betrays it. For what Joachim doesn't know as he burrows closer to East Germany, is that the escape operation has been infiltrated. As the escapees prepare to crawl through the cold, wet darkness, above them, the Stasi are closing in.

Tunnel 29 is about what happens when people lose their freedom - and how some will do anything to win it back.

Helena Merriman is an award-winning journalist and broadcaster. As well as writing and producing Tunnel 29, she created The Inquiry - an award-winning BBC current affairs podcast. She lives in London with her husband and two children.
GOR011905218
9781529334012
1529334012
Tunnel 29: Love, Espionage and Betrayal: the True Story of an Extraordinary Escape Beneath the Berlin Wall by Helena Merriman
Helena Merriman
Used - Like New
Hardback
Hodder & Stoughton
20210805
336
N/A
Book picture is for illustrative purposes only, actual binding, cover or edition may vary.
The book has been read, but looks new. The book cover has no visible wear, and the dust jacket is included if applicable. No missing or damaged pages, no tears, possible very minimal creasing, no underlining or highlighting of text, and no writing in the margins
Trustpilot