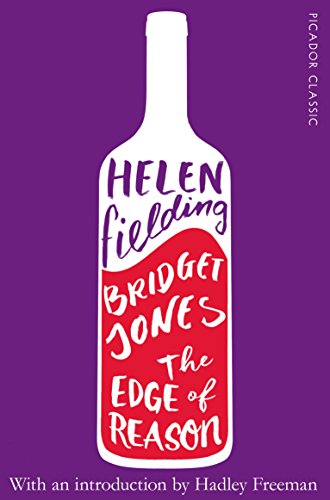 With an introduction by journalist Hadley Freeman

Bridget's second diary ushers in a reformed woman. She is no longer a smoker (well, not much), the wilderness years are over, and she is at last united with man-of-her-dreams Mark Darcy. But things aren't perfect: there's an eight-foot hole in the wall of her flat, she's increasingly worried about a certain boyfriend-stealing beauty, and her friends' mad advice is getting her nowhere - something has to change. And so Bridget decides to embark on a spiritual epiphany to the palm- and magic-mushroom-kissed shores of Thailand. Surely it will be the perfect place to set her life on course once and for all . . .

Bridget Jones: The Edge of Reason is Bridget at her best: funny, wise, and, as ever, a little bit sloshed. A number-one bestseller by Helen Fielding, it is, alongside Bridget Jones's Diary, a modern classic and one of the funniest books you'll ever read.

`Funnier and more accomplished than the original diary, and in fact takes recognition humour into a new dimension . . . A glorious read, and there is a laugh on every page' Sunday Times
`If you loved Bridget Jones's Diary, you'll love this; there is no diminution of the freshness or fun, or of Fielding's underlying intelligence. Success has not spoiled her - she has simply gained in confidence and aplomb . . . Fielding has a seam here she can mine endlessly until she herself gets bored, which I dare say will be long before her readers do' Mail on Sunday
`Helen Fielding has created the most enchanting heroine for the millennium' Jilly Cooper
'Bridget Jones's phenomenal success is not just because of her creator's brilliant wit, comic timing and social observation, but because she captures what - alas - it is like to be female . . . I laughed out loud many time while reading The Edge of Reason. Fielding is excellent at a mixture of perception and comedy, capturing thoughts everyone has but hasn't actually expressed' Sally Emerson, Daily Mail
'Bridget is probably the most successful comic creation of this decade, the most controversial and talked-about female fictional character since Lolita . . . Bridget terminology has slipped into common parlance . . . She is still on superb form; get someone to buy you this book for Christmas, read it through in one afternoon, hoot out loud at the many v. good bits' Stephanie Merritt, Observer
'Could Bridget Jones: The Edge of Reason really be as funny as its predecessor? The answer is yes . . . Bridget, the original Singleton, is on ripping form in the sequel . . . But she is far more than the patron saint of single women: she is everyman, or rather, everyperson' Virginia Blackburn, Express
'Fielding has produced a genuinely original fictional voice. Like Anita Loos before her or, perhaps more pertinently, E. M. Delafield in her Diary of a Provincial Lady, she has created a devastatingly funny parody of her life and times . . . Any woman of a certain age can recognize elements of Bridget in herself and will have enormous fun trying to spot them in the book' Rachel Simhon, Daily Telegraph
'Bridget Jones is no mere fictional character, she's the Spirit of the Age' Melanie McDonagh, Evening Standard
'Austen, as before, in Fielding's model, radically but affectionately updated . . . There is, to be honest, a bit of Bridget Jones in a lot of the women and men of a certain generation, and to have those aspects so affectionately rendered, and both ridiculed and subversively celebrated, is a welcome treat' Robert Potts, TLS
Helen Fielding was born in Yorkshire. She worked for many years in London as a newspaper and TV journalist, travelling as wildly and as often as possible to Africa, India and Central America. She is the author of Cause Celeb, Bridget Jones's Diary, Bridget Jones: The Edge of Reason, Olivia Joules and the Overactive Imagination, and Bridget Jones: Mad About the Boy. She co-wrote the screenplays for the movies of Bridget Jones's Diary and The Edge of Reason, starring Renee Zellweger, Colin Firth and Hugh Grant. She now works full-time as a novelist and screenwriter and lives in London and Los Angeles.
GOR009317160
9781509870127
1509870121
Bridget Jones: The Edge of Reason by Helen Fielding
Helen Fielding
Picador Classic
Used - Very Good
Paperback
Pan Macmillan
2018-06-28
432
N/A
Book picture is for illustrative purposes only, actual binding, cover or edition may vary.
This is a used book - there is no escaping the fact it has been read by someone else and it will show signs of wear and previous use. Overall we expect it to be in very good condition, but if you are not entirely satisfied please get in touch with us
Trustpilot