Hard-Boiled Wonderland and the End of the World Haruki Murakami 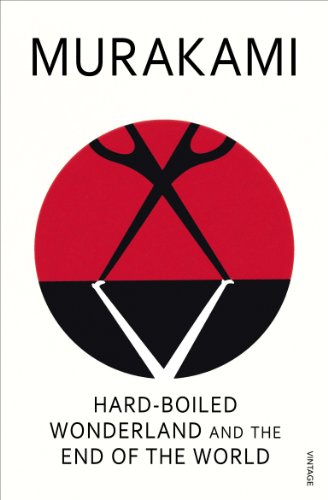 A narrative particle accelerator that zooms between Wild Turkey Whiskey and Bob Dylan, unicorn skulls and voracious librarians, John Coltrane and Lord Jim. Science fiction, detective story and post-modern manifesto all rolled into one rip-roaring novel, Hard-boiled Wonderland and the End of the World is the tour de force that expanded Haruki Murakami's international following.

Tracking one man's descent into the Kafkaesque underworld of contemporary Tokyo, Murakami unites East and West, tragedy and farce, compassion and detachment, slang and philosophy.

His fantasies, with their easy reference to western pulp fiction and music, retain a beauty of the mind * Guardian *
A remarkable writer...he captures the common ache of contemporary heart and head -- Jay McInerney
Combines a witty sci-fi pastiche and a dream-like Utopian fantasy in two separate narratives which alternate in an interweave of precognition and deja vu -- Richard Lloyd Parry * Independent *
Here is abundant imagination at play * Sunday Times *
Murakami's bold willingness to go straight-over-the-top has always been a signal indication of his genius...a powerful melange of disillusioned radicalism, keen intelligence, wicked sarcasm and a general allegiance to the surreal. If Murakami is the "voice of a generation," as he is often proclaimed in Japan, then it is the generation of Thomas Pynchon and Don De Lillo * Washington Post *

In 1978, Haruki Murakami was 29 and running a jazz bar in downtown Tokyo. One April day, the impulse to write a novel came to him suddenly while watching a baseball game. That first novel, Hear the Wind Sing, won a new writers' award and was published the following year. More followed, including A Wild Sheep Chase and Hard-Boiled Wonderland and the End of the World, but it was Norwegian Wood, published in 1987, which turned Murakami from a writer into a phenomenon. His books became bestsellers, were translated into many languages, including English, and the door was thrown wide open to Murakami's unique and addictive fictional universe.

Murakami writes with admirable discipline, producing ten pages a day, after which he runs ten kilometres (he began long-distance running in 1982 and has participated in numerous marathons and races), works on translations, and then reads, listens to records and cooks. His passions colour his non-fiction output, from What I Talk About When I Talk About Running to Absolutely On Music, and they also seep into his novels and short stories, providing quotidian moments in his otherwise freewheeling flights of imaginative inquiry. In works such as The Wind-Up Bird Chronicle, 1Q84 and Men Without Women, his distinctive blend of the mysterious and the everyday, of melancholy and humour, continues to enchant readers, ensuring Murakami's place as one of the world's most acclaimed and well-loved writers.

GOR001219090
9780099448785
0099448785
Hard-Boiled Wonderland and the End of the World by Haruki Murakami
Haruki Murakami
Used - Very Good
Paperback
Vintage Publishing
2001-09-28
416
N/A
Book picture is for illustrative purposes only, actual binding, cover or edition may vary.
This is a used book - there is no escaping the fact it has been read by someone else and it will show signs of wear and previous use. Overall we expect it to be in very good condition, but if you are not entirely satisfied please get in touch with us
Trustpilot