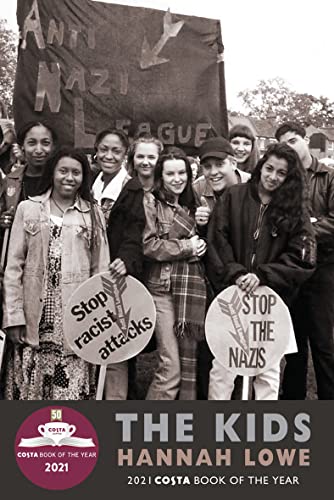 The Kids by Hannah Lowe

Hannah Lowe taught for a decade in an inner-city London sixth form. At the heart of this book of compassionate and energetic sonnets are 'The Kids', her students, the teenagers she nurtured. But the poems go further, meeting her own child self as she comes of age in the riotous 80s and 90s, later bearing witness to her small son's experience.

The Kids by Hannah Lowe

Hannah Lowe taught for a decade in an inner-city London sixth form. At the heart of this book of compassionate and energetic sonnets are 'The Kids', her students, the teenagers she nurtured. But the poems go further, meeting her own child self as she comes of age in the riotous 80s and 90s, later bearing witness to her small son learning to negotiate contemporary London. Across these deeply felt poems, Lowe interrogates the acts of teaching and learning with empathy and humour. Social class, gender and race - and their fundamental intersection with education - are investigated with an ever critical and introspective eye. The sonnet is re-energised, becoming a classroom, a memory box and even a mind itself as 'The Kids' learn and negotiate their own unknown futures. These boisterous and musical poems explore and explode the universal experience of what it is to be taught, and to teach, ultimately reaching out and speaking to the child in all of us. The poems in the first section of the book draw on Hannah Lowe's experiences as a teacher in the 2000s, but the scenarios are largely fictitious, as are the names of the students. The Kids is a Poetry Book Society Choice.
The poems in The Kids fizz and chat with all the vitality and longing of the classes they conjure. Funny, moving, sometimes painful and always questioning, they capture teachers and their students learning life from each other in profound and unexpected ways. A joy to read. -- Liz Berry
These sequences of stories are a refreshing update to The Prime of Miss Jean Brodie and To Sir with Love. Each of Lowe's sonnets is a blackboard chalked with the tales of earnest teachers, of cheeky and lovable students, of being mentored to become a poet and of motherhood and learning to instruct again. Lowe makes the sonnet exciting for our age through its urgent, its compassionate, its wonderfully humorous address of the personal and the social. -- Daljit Nagra
Always, we are in the hands of Lowe's singular, effortless voice, and reminded that all good education should be an education in class, in the legacies and histories of empire and in the self. -- Andrew McMillan * Poetry Book Society Bulletin *
Hannah Lowe was born in Ilford to an English mother and Jamaican-Chinese father. She has lived in London, Brighton and Santa Cruz, California. She studied American Literature at the University of Sussex and has a Masters degree in Refugee Studies, and a PhD in Creative Writing from Newcastle University. She has worked as a teacher of literature, and is now a lecturer in Creative Writing at Brunel University. Her pamphlet The Hitcher (The Rialto, 2011) was widely praised. Her first book-length collection Chick (Bloodaxe Books, 2013) won the 2015 Michael Murphy Memorial Prize, was shortlisted for the Forward Prize for Best First Collection, the Fenton Aldeburgh First Collection Prize and the Seamus Heaney Centre Prize for Poetry, and was selected for the Poetry Book Society's Next Generation Poets 2014 promotion. This was followed by two pamphlets, R x (sine wave peak, 2013) and Ormonde (Hercules Editions, 2014), and her family memoir Long Time No See (Periscope, 2015). She also read from Long Time, No See on BBC Radio 4's Book of the Week in 2015. Her second full-length collection, Chan, was published by Bloodaxe in 2016, followed by a pamphlet, The Neighbourhood (Outspoken Press) in 2019. Her third full collection, The Kids (Bloodaxe Books, 2021) is a Poetry Book Society Choice. She has been poet in residence at Keats House, and in 2020 she received a Cholmondeley Award from the Society of Authors.
8 The White Dog I 11 The Register 12 Try, Try, Try Again 13 Queen Bee 14 The Art of Teaching I 15 The Art of Teaching II 16 The Art of Teaching III 17 Technology 18 Sonnet for Vlad 19 The Only English Kid 20 Notes on a Scandal 21 Boy 22 Simile 23 The Sixth-form Theatre Trip 24 Sonnet for the A Level English Literature and Language Poetry Syllabus 25 Red-handed 26 Sonnet for the Punched Pocket 27 Pepys 28 Janine I 29 Janine II 30 The Unretained 31 All Over It 32 Sonnet for Rosie 33 Something Sweet 34 7/7 35 Ricochet 36 British-born II 38 Mr Presley 39 Mrs Vanuka 40 Blocks 41 She 42 Bethena 43 Etudier 44 Martin and Pam 45 The Only Black Girl 46 Rain Dance 47 The Pitch 48 John I: Pink Humming Bird 49 John II: For Colored Girls Who Have Considered Suicide When the Rainbow is Enuf 50 Love 51 So Amazing 52 The Stroke 55 Sonnet for Noah 56 Welling 57 Dear Professor 58 White Roses 59 Daughter 60 House 61 The River 62 Players III 64 The Sky Is Snowing 65 Skirting 66 Scooting 67 Fire Scissors Drowning 68 The Size of Him 69 Sonnet for Boredom 70 Balloons 71 In H&M 72 Sonnet for Darren 73 Zoom 74 Aretha in the Bath 75 His Books 76 Anjali Mudra 77 Sonnet for Rory with Soap Bubbles 78 Ni hao 79 Kathy, Carla
NGR9781780375793
9781780375793
1780375794
The Kids by Hannah Lowe
Hannah Lowe
New
Paperback
Bloodaxe Books Ltd
20210916
80
N/A
Book picture is for illustrative purposes only, actual binding, cover or edition may vary.
This is a new book - be the first to read this copy. With untouched pages and a perfect binding, your brand new copy is ready to be opened for the first time
Trustpilot