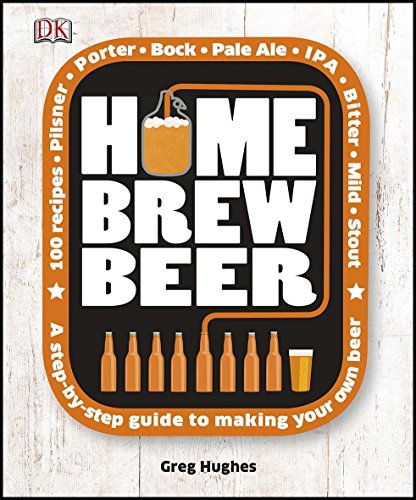 A guide to brewing your own beer at home. It includes over 100 home brew beer recipes from around the world with brewer's tips and photographs of the finished beer so you know what you're aiming for.

A step-by-step guide to making your own homebrew beer.

If you're keen to learn how to make your own craft beer at home, but need a manual that not only provides instructions about making all types of beer but also provides homebrew recipes, then Home Brew Beer is for you.

With over 100 beer recipes - including beer styles such as pale ale, weiss beer, wheat beer, and pilsner beer - Home Brew Beer also features brewer's tips and photographs of the finished beer so you know what you're aiming for. Plus, this ultimate reference book provides techniques for three levels of difficulty for beer making, allowing you to brew beer from a basic kit, malt extract, or the full grain method used by professional brewers. Recipes are categorised by beer style including every variation of real ale, lager, and hybrid beer, with overviews describing the typical appearance, flavour, aroma, and strength of each style of beer. You'll also learn the science behind the brewing process, and handy timelines and step-by-step photographs show you what to do at every stage of the brewing process.

Home Brew Beer is great for beginner home brewers needing clear explanations, more accomplished brewers who want to take their interest of beer making to the next level, or anyone looking for a wealth of delicious and satisfying beer recipes.

GOR005319418
9781409331766
1409331768
Home Brew Beer by Greg Hughes
Greg Hughes
Used - Very Good
Hardback
Dorling Kindersley Ltd
2013-07-24
224
N/A
Book picture is for illustrative purposes only, actual binding, cover or edition may vary.
This is a used book - there is no escaping the fact it has been read by someone else and it will show signs of wear and previous use. Overall we expect it to be in very good condition, but if you are not entirely satisfied please get in touch with us
Trustpilot