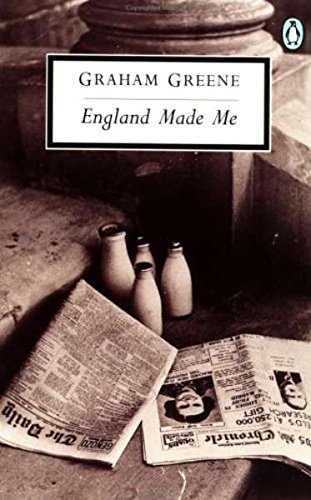 England Made Me by Graham Greene

Anthony Farrant has boasted, lied and cheated his way through jobs all over the world. Then his twin sister, Kate, gets him taken on as the bodyguard of Krogh, her lover and boss, a megalomaniac Swedish financier. All goes well until Krogh gives orders that offend Anthony's innate decency.

England Made Me by Graham Greene

From master storyteller Graham Greene comes the tale of Anthony Farrant, who has boasted, lied and cheated his way through jobs all over the world. Then his adoring twin sister, Kate, gets him taken on as the bodyguard of Krogh, her lover and boss, a megalomaniac Swedish financier. All goes well until Krogh gives orders that offend Anthony's innate decency. Outraged and blind to risk, he leaks information to Minty, a shabby journalist and fellow victim of life, a decision that will lead to disastrous consequences.

For more than seventy years, Penguin has been the leading publisher of classic literature in the English-speaking world. With more than 1,700 titles, Penguin Classics represents a global bookshelf of the best works throughout history and across genres and disciplines. Readers trust the series to provide authoritative texts enhanced by introductions and notes by distinguished scholars and contemporary authors, as well as up-to-date translations by award-winning translators.

Graham Greene (1904-1991), whose long life nearly spanned the length of the twentieth century, was one of its greatest novelists. Educated at Berkhamsted School and Balliol College, Oxford, he started his career as a sub-editor of The Times of London. He began to attract notice as a novelist with his fourth book, Orient Express, in 1932. In 1935, he trekked across northern Liberia, his first experience in Africa, recounted in A Journey Without Maps (1936). He converted to Catholicism in 1926, an edifying decision, and reported on religious persecution in Mexico in 1938 in The Lawless Roads, which served as a background for his famous The Power and the Glory, one of several "Catholic" novels (Brighton Rock, The Heart of the Matter, The End of the Affair). During the war he worked for the British secret service in Sierra Leone; afterward, he began wide-ranging travels as a journalist, which were reflected in novels such as The Quiet American, Our Man in Havana, The Comedians, Travels with My Aunt, The Honorary Consul, The Human Factor, Monsignor Quixote, and The Captain and the Enemy. In addition to his many novels, Graham Greene wrote several collections of short stories, four travel books, six plays, two books of autobiography--A Sort of Life and Ways of Escape--two biographies, and four books for children. He also contributed hundreds of essays and film and book reviews to The Spectator and other journals, many of which appear in the late collection Reflections. Most of his novels have been filmed, including The Third Man, which the author first wrote as a film treatment. Graham Greene was named Companion of Honour and received the Order of Merit among numerous other awards.
GOR001756744
9780140185515
0140185518
England Made Me by Graham Greene
Graham Greene
Twentieth Century Classics S.
Used - Very Good
Paperback
Penguin Books Ltd
1992-01-30
208
N/A
Book picture is for illustrative purposes only, actual binding, cover or edition may vary.
This is a used book - there is no escaping the fact it has been read by someone else and it will show signs of wear and previous use. Overall we expect it to be in very good condition, but if you are not entirely satisfied please get in touch with us
Trustpilot