The Most Beautiful Job in the World Giulia Mensitieri (Independent Scholar, France) 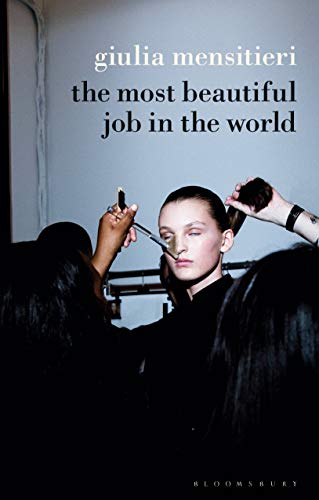 The Most Beautiful Job in the World by Giulia Mensitieri (Independent Scholar, France)

The Most Beautiful Job in the World: Lifting the Veil on the Fashion Industry by Giulia Mensitieri (Independent Scholar, France)

A powerful expose of Parisian haute couture - Book of the Week, Times Higher Education Fashion is one of the most powerful industries in the world, accounting for 6% of global consumption and growing steadily. Since the 1980s and the birth of the neoliberal economy, it has emerged as the glittering face of capitalism, bringing together prestige, power and beauty and occupying a central place in media and consumer fantasies. Yet the fashion industry, which claims to offer highly desirable job opportunities, relies significantly on job instability, not just in outsourced garment production but at the very heart of its creative production of luxury. Based on an in-depth investigation involving stylists, models, designers, hairdressers, make-up artists, photographers and interns, anthropologist Giulia Mensitieri goes behind fashion's glamorous facade to explore the lived realities of working in the industry. This challenging book lays bare the working conditions of 'the most beautiful job in the world,' showing that exploitation isn't confined to sweatshops abroad or sexual harassment of models, but exists at the very heart of the powerful symbolic and economic centre of fashion.
[The book's] arguments are compelling. Mensitieri skilfully shows how fashion thrives on its own image of inaccessible glamour: not just selling aspirational fantasy via luxury goods, but also taking advantage of those who produce and help to sell these goods by making them feel lucky to be here in this world of dream-making. * British Vogue *
Mensitieri's book is a meticulously researched ethnographic study of the immaterial production of fashion ... Although fashion is its main focus, Mensitieri's book also cleverly turns its critical lens on other fields of supposedly creative endeavour - including academia - where a similarly precarious workforce props up an industry based on constant flexibility, blurred boundaries between work and life, and the promise of a fulfilling career. It is no wonder that it has troubled the French fashion industry. It should. * Times Higher Education *
A fascinating insiders' account of fashion. * Stylist *
Expose[s] a culture of exploitation across the industry. * Vogue Business *
It's no secret that the fashion world is only beautiful from a distance. [This book] provides substance and critical context to the truism. The findings are rivetingly awful ... Mensitieri's academic approach and deeper analysis stop the book from simply being a scathing tell-all or a cheap dig at terrible people who have no self-awareness. The point she makes in her wider analysis can just as easily be applied to most of the jobs across all the arts, media and culture sectors. * Bidisha, British broadcaster, critic and journalist *
Studded with lucid and chilling vignettes that will stick in your memory, Mensitieri's book is a remarkable analysis of how creative capitalism persuades people to work for nothing in the glamor industry, and why their poverty is anything but passionate. * Andrew Ross, New York University, USA *
A riveting and revelatory expose, The Most Beautiful Job takes us behind-the-scenes of fashion's phantasmagoria to highlight the precarious, oft-exploited workforce propelling the fashion industry. Mensitieri is a deft researcher, masterful storyteller, and astute critic of contemporary capitalism. Her account is a must-read for anyone interested in the harsh realities of the creative economy. * Brooke Erin Duffy, Cornell University, USA *
Marshalling interviews, observations, and history, Mensitieri's portrayal of the underbelly of Parisian fashion labor delivers a devastating critique of the brutal exploitation behind some of the world's biggest fashion houses; this is a bold critique of creative jobs under late capitalism. * Ashley Mears, Boston University, USA *
Giulia Mensitieri has a doctorate in social anthropology and ethnology from the Ecole des Hautes Etudes en Sciences Sociales (EHESS) in Paris, France. Her research focuses on globalisation, the transformations of work, and the coveted imaginary worlds produced by contemporary capitalism. Natasha Lehrer is an award-winning writer and translator. Her writing has appeared in the Guardian, the Times Literary Supplement and The Nation, and elsewhere. She has translated books by Nathalie Leger, Chantal Thomas, Georges Bataille, Robert Desnos, and the Dalai Lama, among others. She won a Rockower award for journalism in 2016, and in 2017 her co-translation (with Cecile Menon) of Suite for Barbara Loden, by Nathalie Leger, won the Scott Moncrieff Translation Prize.
Preface Fashion and the dream Introduction Part I: Fashion and Capitalism: a system for producing the dream 1. Fabricating desire: press and advertising 2. Haute couture, the apotheosis of the dream 3. The circulation of the dream: fashion and globalization Part II: Working in Fashion or lucky to be there 4. On the threshold of the dream: the salespeople 5. The greater the prestige, the lower the pay: the rules of the game for fashion workers 6. Prestige and precariousness: symbolic and material geographies 7. At the heart of the dream: the designer-stylists Part III: The dream and those who work in it 8. At work with an up-and-coming fashion designer 9. Knowing how to be there: work relationships 10. Getting into fashion, creating a persona, coping in fashion, getting out of fashion Conclusion
NGR9781350110168
9781350110168
1350110167
The Most Beautiful Job in the World: Lifting the Veil on the Fashion Industry by Giulia Mensitieri (Independent Scholar, France)
Giulia Mensitieri (Independent Scholar, France)
New
Paperback
Bloomsbury Publishing PLC
2020-08-06
288
N/A
Book picture is for illustrative purposes only, actual binding, cover or edition may vary.
This is a new book - be the first to read this copy. With untouched pages and a perfect binding, your brand new copy is ready to be opened for the first time
Trustpilot