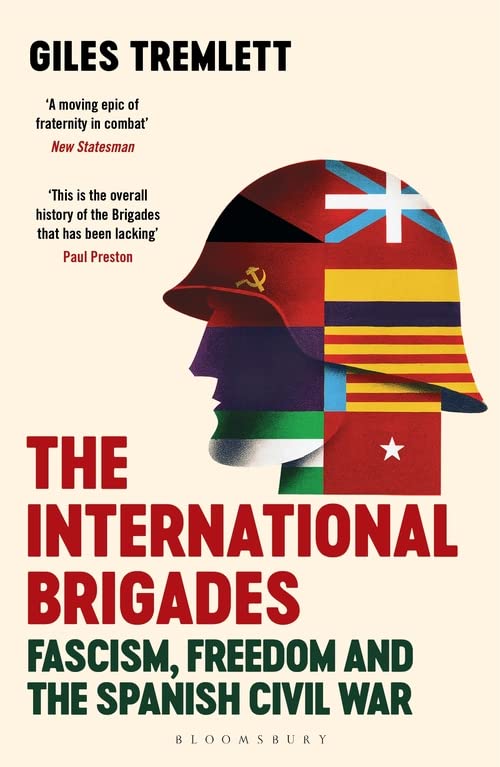 The International Brigades by Giles Tremlett

The International Brigades: Fascism, Freedom and the Spanish Civil War by Giles Tremlett

'Magnificent. Narrative history at its vivid and compelling best' Fergal Keane The first major history of the International Brigades: a tale of blood, ideals and tragedy in the fight against fascism. The Spanish Civil War was the first armed battle in the fight against fascism, and a rallying cry for a generation. Over 35,000 volunteers from sixty-one countries around the world came to defend democracy against the troops of Franco, Hitler and Mussolini. Ill-equipped and disorderly, yet fuelled by a shared sense of purpose and potential glory, these disparate groups of idealistic young men and women formed a volunteer army of a size and type unseen since the Crusades, known as the International Brigades. Were they heroes or fools? Saints or bloodthirsty adventurers? And what exactly did they achieve? In this magisterial history, Giles Tremlett tells - for the first time - the story of the Spanish Civil War through the experiences of this remarkable group. Drawing on the Brigades' archives in Moscow, as well as first-hand accounts, The International Brigades captures all the human drama of a historic mission to halt fascist expansion in Europe.
A narrative of astonishing scope ... This latest study is a remarkable act of scholarship, as well as being captivatingly readable. The first overarching history of the brigades in English, it is alive with the testimonies of those who fought, and so much richer for stretching far beyond the obvious and famous Anglophone accounts of men of letters ... Tremlett is a worthy custodian of their stories. He has created a dazzling mosaic of vignettes and sources, of lives lived and lost, of acts of heroism, solidarity, betrayal and futility, that builds to a grand picture of a conflict that drew idealists from across the world. The war left many of them in despair, injured or dead - but also hardened many more in their determination to defeat fascism. This book is as close to a definitive history as we are likely to get -- Dan Hancox * Guardian *
Tremlett's book marks a heroic episode in the history of the left. At a time when real fascists with real guns are patrolling the streets of American cities, and when far-right violence is on the rise in Spain, the sacrifice of the International Brigaders deserves to be remembered. In doing so, Tremlett reminds us that even just wars are dirty and chaotic, breeding grounds of sadism and injustice, and that the selfless often die first -- Paul Mason * Observer *
This evocative study is the first comprehensive history in English of all the 35,000 international volunteers who fought the combined forces of Hitler, Mussolini and Franco in Spain ... Far more than a civil war, it was Europe's war against Fascism. Giles Tremlett encapsulates its huge stakes perfectly ... There's no feeling of a heavy read here, such is Tremlett's deft handling of the material and page-turning prose. The story races along, replete with memorable stories and poignant vignettes ... [A] gripping book ... Through it, the 1930s come hurtling into our twenty-first century present -- Helen Graham * Literary Review *
The bravery and sacrifices of the volunteers from all over the world who fought fascism in Spain keep alive interest in the civil war. Many of the tens of thousands of books about the conflict are about the International Brigades but there has never been one like Giles Tremlett's deeply moving and endlessly informative account. Bursting with memorable quotes and anecdotes, it provides, in lucid and compelling prose, the overall history of the Brigades that has been lacking -- Paul Preston
Magnificent. Narrative history at its vivid and compelling best -- Fergal Keane
More than eighty years after the civil war ended on April 1, 1939, the story of what inspired left-wing sympathisers from all over the world to fight, and what became of them, still fascinates and impassions ... It is an epic tale and Giles Tremlett's The International Brigades nails it with the decisiveness of a political commissar's bullet to the back of a deserter's head. Using widely trawled research, he has created an electrifying narrative that brings to life the idealism, suffering, chaos and paranoia of what a journalist at the time called the most truly international army the world has seen since the Crusades ... A powerful portrayal of an episode underpinned by what Nehru, after visiting a British unit, called so much human courage, so much of what was worthwhile in life -- Isambard Wilkinson * The Times *
Tremlett deftly interweaves this rich archival material with colourful first-hand accounts from numerous participants ... A highly engaging read, helped considerably by the author's fluid prose style and journalist's eye for a good story ... A well-researched and comprehensive work of scholarship -- Richard Baxell * Spectator *
Giles Tremlett is a contributing editor to the Guardian and Fellow of the Canada Blanch Centre, London School of Economics. He has lived in and written about Spain for over twenty years, and is the author of Catherine of Aragon, Ghosts of Spain and Isabella of Castile, winner of the 2018 Elizabeth Longford Prize. He lives in Madrid with his family.
NGR9781408854075
9781408854075
1408854074
The International Brigades: Fascism, Freedom and the Spanish Civil War by Giles Tremlett
Giles Tremlett
New
Paperback
Bloomsbury Publishing PLC
2021-10-14
720
N/A
Book picture is for illustrative purposes only, actual binding, cover or edition may vary.
This is a new book - be the first to read this copy. With untouched pages and a perfect binding, your brand new copy is ready to be opened for the first time
Trustpilot