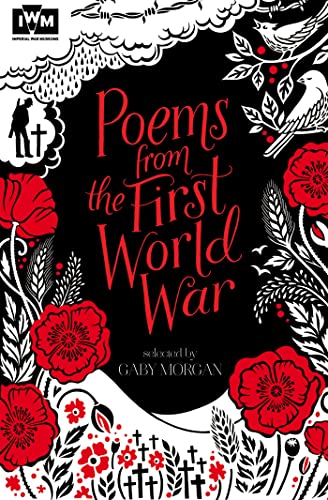 Poems from the First World War by Gaby Morgan

A collection of poetry from the First World War, published in association with Imperial War Museums to mark the centenary of the start of the World War I.

Poems from the First World War: Published in Association with Imperial War Museums by Gaby Morgan

Poems from the First World War is a moving and powerful collection of poems written by soldiers, nurses, mothers, sweethearts and family and friends who experienced WWI from different standpoints. It records the early excitement and patriotism, the bravery, friendship and loyalty of the soldiers, and the heartbreak, disillusionment and regret as the war went on to damage a generation. It includes poems from Wilfred Owen, Rupert Brooke, Vera Brittain, Eleanor Farjeon, Edward Thomas, Laurence Binyon, John McCrae, Siegfried Sassoon and many more.

The Imperial War Museum was founded in 1917 to collect and display material relating to the 'Great War', which was still being fought. Today IWM is unique in its coverage of conflicts, especially those involving Britain and the Commonwealth, from the First World War to the present. They seek to provide for, and to encourage, the study and understanding of the history of modern war and wartime experience.

Gaby Morgan is the Editorial Director for Non-fiction, Poetry and Licensing at Macmillan Children's Books. She has compiled many bestselling anthologies, including Read Me and Laugh: A Funny Poem for Every Day of the Year, In My Sky at Twilight: Poems of Eternal Love, Fairy Poems - which was short-listed for the CLPE Award - and A First Poetry Book with Pie Corbett.
GOR006182832
9781447248644
1447248643
Poems from the First World War: Published in Association with Imperial War Museums by Gaby Morgan
Gaby Morgan
Used - Very Good
Paperback
Pan Macmillan
20140508
208
N/A
Book picture is for illustrative purposes only, actual binding, cover or edition may vary.
This is a used book - there is no escaping the fact it has been read by someone else and it will show signs of wear and previous use. Overall we expect it to be in very good condition, but if you are not entirely satisfied please get in touch with us
Trustpilot