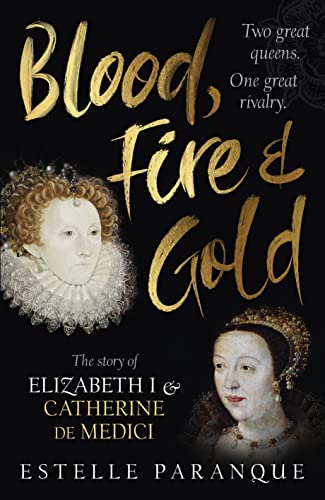 Blood, Fire and Gold: The story of Elizabeth I and Catherine de Medici by Estelle Paranque

'Exciting and compelling, packed full of tantalising details of diplomacy and court life, Paranque succeeds both in bringing history to life, but also in putting flesh on the bones of these two extraordinary women and rival queens' Kate Mosse

'A smart and stylish portrait of two of Europe's most remarkable rulers, a compelling profile of female power and - that rarest of things - a truly original book about the Tudor period' Jessie Childs

In sixteenth-century Europe, two women came to hold all the power, against all the odds. They were Elizabeth I and Catherine de Medici.

One a Virgin Queen who ruled her kingdom alone, and the other a clandestine leader who used her children to shape the dynasties of Europe, much has been written about these iconic women. But nothing has been said of their complicated relationship: thirty years of friendship, competition and conflict that changed the face of Europe.

This is a story of two remarkable visionaries: a story of blood, fire and gold. It is also a tale of ceaseless calculation, of love and rivalry, of war and wisdom - and of female power in a male world. Shining new light on their legendary kingdoms Blood, Fire and Gold provides a new way of looking at two of history's most powerful women, and how they shaped each other as profoundly as they shaped the course of history. Drawing on their letters and brand new research, Estelle Paranque writes an entirely new chapter in the well-worn story of the sixteenth century.

Exciting and compelling, packed full of tantalising details of diplomacy and court life, Paranque succeeds both in bringing history to life, but also in putting flesh on the bones of these two extraordinary women and rival queens. * Kate Mosse *
A stunning portrayal of two of the most powerful women in European history. In another life, Elizabeth I and Catherine de Medici might have been friends. But politics, religion and a bitter personal rivalry set them on a collision course that would dominate Anglo-French relations for three decades. A fresh, engaging and impeccably researched narrative that brings the characters of both queens vividly to life. Not to be missed. * Tracy Borman *
Excellently told, this thrilling, lyrical story of two extraordinarily powerful women offers the missing piece in our understanding of Tudor England and Renaissance France. * Suzannah Lipscomb *
A smart and stylish portrait of two of Europe's most remarkable rulers, a compelling profile of female power and - that rarest of things - a truly original book about the Tudor period. * Jessie Childs *
Bursting with fresh perspectives, this is a vibrant retelling of a story you thought you knew * Dan Snow *
Blood, Fire and Gold is a treasure house of historical detail that transports readers back to a time when court intrigue was quite literally a matter of life and death-especially for the women thrust into its dark heart. Spellbinding in its scope; cinematic in its rendering. Estelle Paranque is the perfect guide to this world, and an exciting, new voice in narrative history. * Lindsey Fitzharris *
Utterly absorbing and beautifully crafted, Estelle Paranque navigates her way through the intrigues and power struggles of the English and French courts with an expert hand. Through her gripping narrative, she brings two extraordinary women who experienced love, heartbreak, triumph and disaster masterfully to life. Blood, Fire and Gold is pacy, colourful, and above all compulsively readable. A stunning debut. * Nicola Tallis *
An innovative and exciting way of studying the past from a brilliant historian. Blood, Fire and Gold shines a new light onto the diplomatic tensions between sixteenth-century England and France, as well as the Wars of Religion, espionage, court intrigue, and the games of power. At its heart are the fascinating figures of Elizabeth I and Catherine de Medici, whose tense and fascinating relationship is expertly told. * Gareth Russell *
Blood, Fire and Gold is an utterly absorbing blend of reimagining and scholarly analysis of the profoundly gendered world of power and politics in the 16th century. Dr Estelle Paranque masterfully draws together the strands of narrative of two of the most powerful Queens of Europe, engaged in a relentless and delicate balancing act of rivalry and common cause. Blood, Fire and Gold underscores the brilliance of these two women, who shaped and were in turn shaped by each other, their strength and political acumen forging a legacy for future queens. * Lauren Mackay *
Estelle Paranque is an Assistant Professor in History at NCH at Northeastern (London campus). She has participated in several international historical documentaries on TV, including BBC Two's The Boleyns: A Scandalous Family (aired in August 2021), where she shared her knowledge of Anglo-French relations under Henry VIII's reign. She has also participated in Secrets d'Histoire (France 2/ France 3) as well as the history podcasts, HistoryHit, Not Just the Tudors, and Talking Tudors. She has extensively published on the Tudors and the Valois and is the author of Elizabeth I of England Through Valois Eyes (Palgrave Macmillan, 2019).
NGR9781529109221
9781529109221
1529109221
Blood, Fire and Gold: The story of Elizabeth I and Catherine de Medici by Estelle Paranque
Estelle Paranque
New
Hardback
Ebury Publishing
2022-06-30
336
N/A
Book picture is for illustrative purposes only, actual binding, cover or edition may vary.
This is a new book - be the first to read this copy. With untouched pages and a perfect binding, your brand new copy is ready to be opened for the first time
Trustpilot