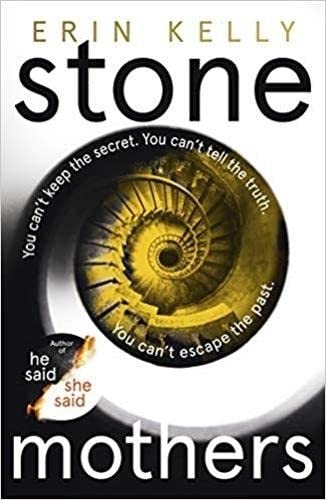 The stunning new novel from the Sunday Times bestselling author of HE SAID/SHE SAID.

Stone Mothers: the thrilling new suspense novel from the bestselling author of He Said/She Said by Erin Kelly

The men who built the asylums called them 'stone mothers': places of safety to hold troubled women and nurse them back to health. But no one wants a mother made of stone...

Nazareth mental hospital has been converted to luxury flats, but it still has its secrets.

Three women live in its shadow:
Marianne, who fled her home, her boyfriend and the body they buried. Now a successful academic, a loving mother and a loyal wife, she fears her secret being revealed, her world being ripped apart.
Honor, her daughter, who she will do anything to protect.
And Helen, her worst enemy - and the only person she can trust.

Marianne can't tell the truth. She can't keep the secret. And none of them can escape the past...

Moving back through time to reveal twists you'll never see coming, Stone Mothers is the gripping new suspense novel from the bestselling author of He Said/She Said.

'A genuinely surprising twist that turns assumptions neatly on their heads.' Observer

'The plot is so CLEVER... and the writing is perfection.' Marian Keyes

'A clever, nuanced psychological thriller from one of the best writers in the genre. Properly chilling, you'll be gripped.' Red

'Crime fiction at its most ingenious' Sunday Express

'From the twist on the first page to the final gasp, this is a dazzling psychological thriller' Grazia

A beautifully dark, Gothic story of characters haunted by their past: poignant and tragic, full of unexpected shifts and twists, addictively scary and thrillingly audacious. -- Nicci French
STONE MOTHERS is a clever, nuanced psychological thriller from one of the best writers in the genre. Properly chilling, you'll be gripped. * Red *
The incomparable Erin Kelly has written another captivating, cleverly constructed contemporary novel. -- Paula Hawkins, author of The Girl on the Train
Crime fiction at its most ingenious and gripping - and its wisest. * Sunday Express *
The fantastically taut, compelling plot, brooding atmosphere and fast pace make it a winner. * Good Housekeeping *
Doubly excellent - truly fine psychological suspense, and plenty to think about, too, when your pulse has returned to normal. -- Lee Child, Sunday Times bestselling author of the Jack Reacher series
A gripping thriller which is impossible to put down, culminating in a heart-stopping final showdown * Daily Express *
From the twist on the first page to the final gasp, this is a dazzling psychological thriller. * Grazia *
Compelling, darkly atmospheric and powerful, STONE MOTHERS leads you deeper and deeper into a claustrophobic world of desire, violence and blackmail. With all the ingredients of a classic psychological thriller, it's also got amazing depth and resonance, examining the shifting dynamics of power and the legacy of violence. -- Bridget Collins, author of The Binding
Gripping, atmospheric thriller. * Daily Mirror *
Erin Kelly is the Sunday Times bestselling author of The Poison Tree, The Sick Rose, The Burning Air, The Ties That Bind, He Said/She Said, Stone Mothers and Broadchurch: The Novel, inspired by the mega-hit TV series. In 2013, The Poison Tree became a major ITV drama and was a Richard & Judy Summer Read in 2011. He Said/She Said spent six weeks in the top ten in both hardback and paperback, was longlisted for the Theakston's Old Peculier crime novel of the year award, and selected for both the Simon Mayo Radio 2 and Richard & Judy Book Clubs. She has worked as a freelance journalist since 1998 and written for the Guardian, The Sunday Times, Daily Mail, New Statesman, Red, Elle, Cosmopolitan and The Pool. Born in London in 1976, she lives in north London with her husband and daughters. erinkelly.co.uk twitter.com/mserinkelly
GOR009731177
9781444797312
144479731X
Stone Mothers: the thrilling new suspense novel from the bestselling author of He Said/She Said by Erin Kelly
Erin Kelly
Used - Very Good
Hardback
Hodder & Stoughton
2019-04-04
352
N/A
Book picture is for illustrative purposes only, actual binding, cover or edition may vary.
This is a used book - there is no escaping the fact it has been read by someone else and it will show signs of wear and previous use. Overall we expect it to be in very good condition, but if you are not entirely satisfied please get in touch with us
Trustpilot