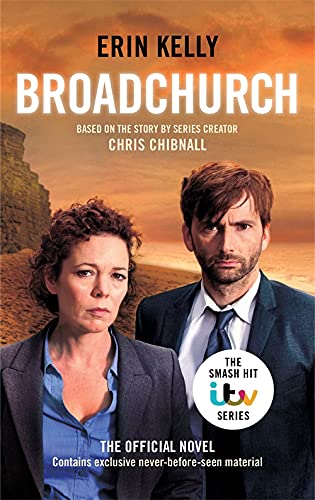 The official, unmissable Broadchurch novel, inspired by the first season of the mega-hit ITV series.

Inspired by the first season of the BAFTA award-winning ITV series, this is the official, unmissable Broadchurch novel. Incredibly moving and containing never-before-seen material, it takes you inside the minds and motivations of the unforgettable cast of characters.

It's a hot July morning in the Dorset town of Broadchurch when Beth Latimer realises that her eleven-year-old son, Danny, is missing. As Beth searches desperately for her boy, her best friend, local police officer DS Ellie Miller, arrives at work to find that the promotion she was promised has been given to disreputable Scottish outsider DI Alec Hardy.

When Danny's body is found on the beach Ellie must put her feelings aside as she works with DI Hardy to solve the mystery of Danny's death. As the case becomes a murder investigation the news hits the national press, jolting sleepy Broadchurch into the national spotlight.

As the town's secrets begin to unravel, members of this tight-knit community begin to consider those in their midst. Right now it's impossible to know who to trust...

The narrative allows for an insight into the mindset of the characters - from the baffled detectives to the raw despair of Danny's parents...a crackingly well-constructed crime story, with a wonderfully shocking conclusion. * Sunday Mirror *
Kelly's novelisation of the eponymous British TV series, works as both a classic puzzle and an unnerving portrait of a little English town wracked by a young boy's murder... Kelly folds a loving portrait of rural Dorset and a well-made whodunit into a painstaking account of the grief and unimaginable pain that follow in the wake of one child's murder. * Kirkus Starred Review *
Loved the ITV series? Then you'll adore this clever read from psychological-thriller queen Erin. While a book based on a TV show shouldn't work, this really does...the big reveal still gives you a massive kick in the gut. * The Sun: Fabulous Magazine *
This is the author's own take on the story, with even more atmosphere, emotion and twists than the TV original. * Essentials Magazine *
With the addition of new material never seen on screen, Kelly takes a fresh perspective on the murder investigation, particularly the breakdown of a close-knit community. Whether you've seen the series or not, this is definitely worth your time. * Bella Magazine *
Kelly takes ownership of this novelisation by exploring characters' relationships and unvoiced emotions; she's masterful at weaving unbreakable connections between characters, and then tainting them with fear, guilt, and suspicion...a must-read for followers of character-driven police procedurals like those of Elizabeth George, Denise Mina and Tana French. * Booklist *
Kelly has completely captured the rolling tension, cinematic detail and superlative characterisation of the [TV] programme...and even if you are new to the story, you will be instantly mesmerised...Original viewers of Broadchurch will quickly identify the little twists and new details added to the novelisation - a neat touch that enhances the story even further. Whether or not you were a fan of the TV show, this is one crime book that does not disappoint. * CrimeFictionLover.com *

Erin Kelly is the author of four critically acclaimed psychological thrillers, The Poison Tree, The Sick Rose, The Burning Air and The Ties that Bind. The Poison Tree was a bestselling Richard & Judy Book Club selection in 2011 and was adapted for the screen as a major ITV drama in 2012. Erin also works as a freelance journalist, writing for newspapers including The Sunday Times, The Sunday Telegraph and the Daily Mail as well as magazines including Red, Psychologies, Marie Claire and Elle. She lives in London with her family.

Chris Chibnall is the creator, writer and executive producer of the award winning ITV drama, Broadchurch. He has also written for TV shows including Life on Mars, Law & Order, Doctor Who and its spin-off, Torchwood. Chris's latest BBC1 drama, The Great Train Robbery, tells the story of the infamous 1963 British heist. He lives in Dorset with his family.

GOR005958981
9780751555585
0751555584
Broadchurch (Series 1) by Erin Kelly
Erin Kelly
Broadchurch
Used - Very Good
Paperback
Little, Brown Book Group
2014-08-12
448
N/A
Book picture is for illustrative purposes only, actual binding, cover or edition may vary.
This is a used book - there is no escaping the fact it has been read by someone else and it will show signs of wear and previous use. Overall we expect it to be in very good condition, but if you are not entirely satisfied please get in touch with us
Trustpilot