The Mountain of Adventure Enid Blyton 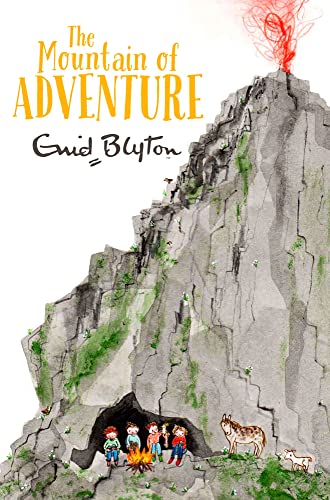 The Mountain of Adventure by Enid Blyton

The Mountain of Adventure is a children's classic from Enid Blyton, with a beautifully illustrated cover from rising picture-book star Rebecca Cobb.

The Mountain of Adventure by Enid Blyton

The Mountain of Adventure is the fifth thrilling instalment in the Adventure series by Enid Blyton, one of the best-loved children's writers of all time.

Surely a peaceful holiday in the Welsh mountains will keep the children out of trouble! But the mystery of a rumbling mountain soon has them thirsty for more adventure.

Philip, Dinah, Lucy-Ann, Jack and Kiki the parrot are determined to explore the mountain and uncover its secret, but first they must escape from a pack of ravenous wolves and a mad genius who plans to rule the world!

Enid Blyton, who died in 1968, is one of the most successful children's authors of all time. She wrote over 700 books, which have been translated into more than forty languages and have sold more than 400 million copies around the world. Her stories of magic, adventure and friendship continue to enchant children the world over. Enid Blyton's beloved works include The Famous Five, The Secret Seven, Malory Towers, The Faraway Tree and Adventure series.

Rebecca Cobb is a rising star in children's picture books. Having collaborated on two picture storybooks with the Orange Prize winner Helen Dunmore, Rebecca's debut solo project, the hugely accomplished and heart-breakingly beautiful Missing Mummy, was published by Macmillan in 2011. The gorgeously funny and well-received Lunchtime followed and, in addition, Rebecca's stunning illustrations accompanied Julia's Donaldson's wonderfully lyrical story in The Paper Dolls. Aunt Amelia, Rebecca Cobb's third picture book, is every bit as warm, engaging and original as her existing books, and is sure to continue to establish her as a real 'one to watch'. Rebecca lives in Cornwall.

GOR010535557
9781447262794
1447262794
The Mountain of Adventure by Enid Blyton
Enid Blyton
The Adventure Series
Used - Like New
Paperback
Pan Macmillan
2014-07-03
288
N/A
Book picture is for illustrative purposes only, actual binding, cover or edition may vary.
The book has been read, but looks new. The book cover has no visible wear, and the dust jacket is included if applicable. No missing or damaged pages, no tears, possible very minimal creasing, no underlining or highlighting of text, and no writing in the margins
Trustpilot