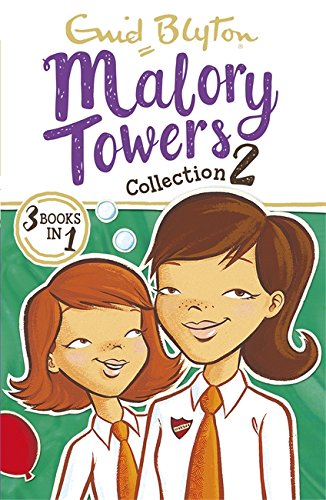 Enormously popular all over the world, Enid Blyton's school series combines everything that makes school so special - friendships, learning, sports, plays and mischief!

For new girl Darrell Rivers, there are friends to be made, pranks to be played and fun to be had at Malory Towers in Enid Blyton's best-loved boarding school series.

Upper Fourth
Darrell is very pleased to be head girl, but Alicia and Betty are determined to ruin her good work. Meanwhile, Darrell's sister Felicity joins Malory Towers and becomes best friends with none other than June - obnoxious, brash and Alicia's cousin.

In the Fifth
Everybody at Malory Towers is excited about the Christmas pantomime. This year they'll be performing Cinderella and everybody wants to be involved. Matters turn very serious when head girl Moira receives an anonymous poison pen letter.

Last Term
Darrell and her friends have reached their last term at Malory Towers. But before they say good-bye one last time there are more adventures to be had, pranks to play and competitions to win.
Expect drama at Malory Towers!

Between 1946 and 1951, Enid Blyton wrote six novels set at Malory Towers. This collection features the original stories and is unillustrated.

Enid Blyton's books have sold over 500 million copies and have been translated into other languages more often than any other children's author. She wrote over 700 books and about 2,000 short stories, including favourites such as The Famous Five,The Secret Seven, The Magic Faraway Tree, Malory Towers and Noddy. Born in London in 1897, Enid lived much of her life in Buckinghamshire and adored dogs, gardening and the countryside. She died in 1968 but remains one of the world's best-loved storytellers.
GOR010319687
9781444935325
1444935321
Malory Towers Collection 2: Books 4-6 by Enid Blyton
Enid Blyton
Malory Towers Collections and Gift books
Used - Like New
Paperback
Hachette Children's Group
2016-10-06
592
N/A
Book picture is for illustrative purposes only, actual binding, cover or edition may vary.
The book has been read, but looks new. The book cover has no visible wear, and the dust jacket is included if applicable. No missing or damaged pages, no tears, possible very minimal creasing, no underlining or highlighting of text, and no writing in the margins
Trustpilot