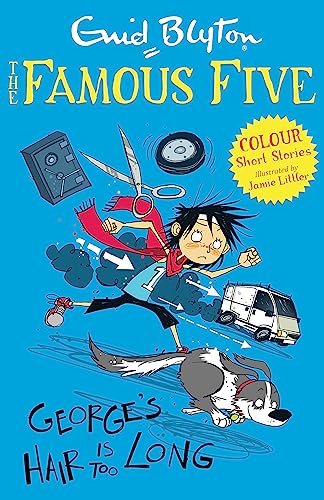 Original Blyton stories are paired with brand new colour illustrations by Jamie Littler in a new and exciting format.

Julian, Dick, Anne, George and Timmy the dog find excitement and adventure wherever they go in Enid Blyton's most popular series.

Borrowing some scissors is the beginning of an adventure for the Famous Five, as George manages to get mixed up with some burglars. The others are too busy eating ice cream to realise that George is in trouble!

Will the Famous Five manage to catch up with the burglars and save the day?

In addition to the Famous Five novels, Enid Blyton wrote a clutch of short stories based on the characters. These
were published in magazines and collected in the Famous Five Short Story Collection (Hodder). For the first time, the complete and original text of George's Hair Is Too Long (1955) appears in an individual volume, illustrated with brand new colour art by Jamie Littler.

Enid Blyton's books have sold over 500 million copies and have been translated into other languages more often than any other children's author. She wrote over 700 books and about 2,000 short stories, including favourites such as The Famous Five,The Secret Seven, The Magic Faraway Tree, Malory Towers and Noddy. Born in London in 1897, Enid lived much of her life in Buckinghamshire and adored dogs, gardening and the countryside. She died in 1968 but remains one of the world's best-loved storytellers. Jamie is a St. Albans-based illustrator who graduated from the Arts Institute at Bournemouth in 2008, and won a High Commendation in the Macmillan Children's Book Award in the same year. Since then Jamie has worked with many varied clients, and his debut children's book, 'MUM'S THE WORD', written by Timothy Knapman, is to be published by Hodder Children's Books in 2013. He is the creator, writer and illustrator of the on-going comic series 'COGG & SPROKIT' which is serialised in the Phoenix Comic, and his debut fiction series 'ATOMIC!', published by Scholastic Children's Books, written and created by Guy Bass, was released in 2012. When not trying to tame his un-naturally fast growing hair, he likes drawing, colouring in, cutting things out and sticking things in. Whatever medium he uses, Jamie tries to create a 'hand-made', organic and energetic feeling in his work. His interests are pretty wide and varied; although he does have a soft spot for wild animals and things that go bump in the night. Jamie is represented by Jodie Marsh at United Agents. Jamie Littler graduated from the Arts Institute at Bournemouth in 2008. He has won a High Commendation Award at the Macmillan Children's Book Awards and is the creator of 'Cogg and Sprokit', which is serialised in the PHOENIX. He has worked on high-profile projects including The Famous Five. Follow him on Twitter @jamieillustrate or visit his website at http://jamielittler.co.uk/
GOR006104541
9781444916263
1444916262
Famous Five Colour Short Stories: George's Hair Is Too Long by Enid Blyton
Enid Blyton
Famous Five: Short Stories
Used - Very Good
Paperback
Hachette Children's Group
2014-02-06
80
N/A
Book picture is for illustrative purposes only, actual binding, cover or edition may vary.
This is a used book - there is no escaping the fact it has been read by someone else and it will show signs of wear and previous use. Overall we expect it to be in very good condition, but if you are not entirely satisfied please get in touch with us
Trustpilot