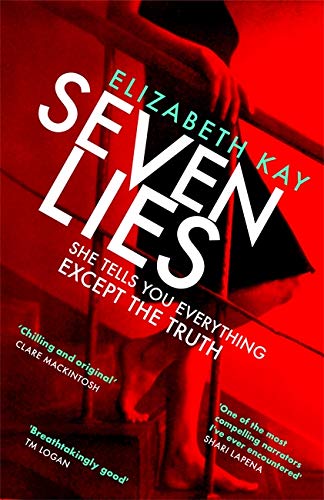 The most mesmerising and unsettling thriller you'll read this year: if lies are dangerous, the truth can be catastrophic . . .

Seven Lies: The most addictive, page-turning thriller of 2020 by Elizabeth Kay

'One of the most compelling narrators I've ever encountered' Shari Lapena

'A protagonist to rival Villanelle' Cosmopolitan

HAVE YOU READ THE MOST EXPLOSIVE DEBUT THRILLER OF THE YEAR?

'Chilling and original' CLARE MACKINTOSH
'A tense nerve-shredder' VAL McDERMID
'The perfect pscyh thriller - smart, dark and morally ambiguous' TAMMY COHEN
'You NEED to read this one' LESLEY KARA
'Toxic friendships don't get more toxic than this' PRIMA
'Breathtakingly good' T.M. LOGAN
COSMOPOLITAN
'You won't want to put this one down' CARA HUNTER
'This is going to be the next massive thriller' PANDORA SYKES
'You'll be turning the pages deep into the night' HARLAN COBEN
'Shockingly intimate and scarily insidious' LISA GARDNER
'The new face of domestic noir' EVENING STANDARD
'Brilliantly twisty' MICHELLE FRANCES
'A clever, deliciously dark pageturner' ALICE FEENEY
'Takes the idea of the unreliable narrator and spins it on its head' ARAMINTA HALL
'Brilliantly plotted' ALI LAND
'You won't be able to put it down' CHRISTINA DALCHER

It all started with one little lie . . .

Jane and Marnie have been inseparable since they were eleven years old. They have a lot in common. In their early twenties they both fell in love and married handsome young men.

But Jane never liked Marnie's husband. He was always so loud and obnoxious, so much larger than life. Which is rather ironic now, of course.

Because if Jane had been honest - if she hadn't lied - then perhaps her best friend's husband might still be alive . . .

This is Jane's opportunity to tell the truth, the question is:
Do you believe her?

A dark, gripping story with one of the most interesting and compelling narrators I've ever encountered. Highly recommended -- Shari Lapena, author of THE COUPLE NEXT DOOR
With scalpel sharp writing and a killer concept, Seven Lies is dark, clever, compelling and utterly assured. It heralds the arrival of a hugely exciting new voice in crime fiction -- Lucy Foley, author of THE HUNTING PARTY
Breathtakingly good - I devoured Seven Lies in a single weekend. A phenomenal debut.
A chilling and original voice. It's gripping, fresh and unsettling - all the ingredients I love -- Clare Mackintosh, author of LET ME LIE
'Friends forever' becomes a weapon swung with fatal force in Elizabeth Kay's debut. A thriller deftly told through seven lies, the calmly manipulative Jane is a protagonist who will haunt you long after you finish turning the pages. The truth, it turns out, can be far more dangerous than any lie....It's going to be the next massive thriller. -- Pandora Sykes
Dark, vivid, and engrossing. You won't want to put this one down! -- Cara Hunter, author of CLOSE TO HOME
Seven Lies is the perfect psych thriller - smart, dark and morally ambiguous. I loved it. -- Tammy Cohen, author of WHEN SHE WAS BAD
You NEED to read this one. So very unsettling! -- Lesley Kara, author of THE RUMOUR
SEVEN LIES is a relentless, chilling story of what happens when friendship becomes obsession. Keep the lights on - you'll be turning pages deep into the night with this one -- Harlan Coben, author of FOOL ME ONCE
Compelling, clever, imaginative and beautifully written -- Jo Spain, author of THE CONFESSION
Kay's unputdownable thriller follows former childhood friends Jane and Marnie down a devious path littered with secrets, murder and, of course, lies * i *
Compulsive, hypnotic . . . a tale of obsession, grief and the real meaning of truth * Red *
With a protagonist to rival Villanelle, you'll love this sharp, original and seductive thriller, which turns the idea of an unreliable narrator on its head. * Cosmopolitan *
I devoured Seven Lies in less than 24 hours. Such a clever, deliciously dark page turner and a compelling read -- Alice Feeney, author of SOMETIMES I LIE
Shockingly intimate and scarily insidious. Seven Lies explores the explosive truths behind obsession, love, and a seemingly perfect friendship -- Lisa Gardner, author of FEAR NOTHING
Seven Lies takes the idea of the unreliable narrator and spins it on its head. An immersive study of female friendship and loneliness with a scarily reliable narrator who proves that truth is often scarier and stranger than any fiction.
A compelling take on the obsession that can come with female friendship * Image *
A pacy domestic thriller sure to keep you reading well past bedtime. Kay holds a mirror up to female friendship and the result is both relatable and utterly chilling -- Sarah Langford, author of IN YOUR DEFENSE
Brilliantly twisty but also so insightful of human nature: this is a chilling portrayal of an obsessive relationship -- Michelle Frances, author of THE GIRLFRIEND
I loved it from the first page: spellbinding, urgent, creepy, and impossible to put down. Seven Lies is a hugely satisfying novel of deeply disturbed psychological suspense. -- Chris Pavone, author of THE PARIS DIVERSION
Superbly controlled writing, a captivating voice and a brilliantly plotted story about a toxic friendship -- Ali Land, author of GOOD ME, BAD ME
Elizabeth Kay's debut is a gorgeously narrated and scarily real account of friendship-turned-fixation. You won't be able to put it down -- Christina Dalcher, author of VOX
An electrifying psychological thriller . . . even readers who suspect where the story is heading should brace themselves for a wild and surprising ride. * Publishers Weekly *
Chilling and unusual, we couldn't put it down * Closer *
With a hold-your-breath moment near the end, we can't stop thinking about it * Heat *
A highly entertaining, pitch-dark exploration of an intense and toxic friendship * Sunday Mirror *
What a narrator, and what a plot . . . I was absolutely hooked. Toxic friendships don't get more toxic than this * Prima *
The new face of domestic noir * Evening Standard *
Chilling * Readers Digest *
A slick debut ... original and clever * Woman's Weekly *
We're in * Stylist *
What a narrator, and what a plot! Toxic friendships don't get more toxic than this. * Prima *
A chilling read that we couldn't put down * Bella *
A remarkable debut from a remarkable author * Shots *
This compelling and unsettling thriller will have you totally gripped! * The Sun (Fabulous Magazine) *
Compelling * Irish Times *
Beautifully lyrical, infused with a kind of anticipatory dread that grips you from the very beginning. * Birmingham Post *
Compelling . . . this fine novel shines a light on how our darkest moments shape our future * ipaper *
This gripping and very scary tale of obsessive love is a tour de force * Irish Independent *
This is the smartest thriller we've read in a while . . . It's twisted and thrilling, and you will zip through it. * Goop *
This is a tense nerve-shredder that wrong-footed me again and again, leaving the hairs on the back of my neck standing up. There's nothing more terrifying than watching someone disintegrate when love takes a wrong turn. -- Val McDermid
Elizabeth Kay started her career as an assistant at Penguin Random House. She is now a commissioning editor and is simultaneously pursuing her passion for writing. Her debut novel, Seven Lies, will be published in 2020. She lives in London with her husband and son.
GOR010851200
9780751578102
075157810X
Seven Lies: The most addictive, page-turning thriller of 2020 by Elizabeth Kay
Elizabeth Kay
Used - Very Good
Paperback
Little, Brown Book Group
2020-10-01
384
N/A
Book picture is for illustrative purposes only, actual binding, cover or edition may vary.
This is a used book - there is no escaping the fact it has been read by someone else and it will show signs of wear and previous use. Overall we expect it to be in very good condition, but if you are not entirely satisfied please get in touch with us
Trustpilot