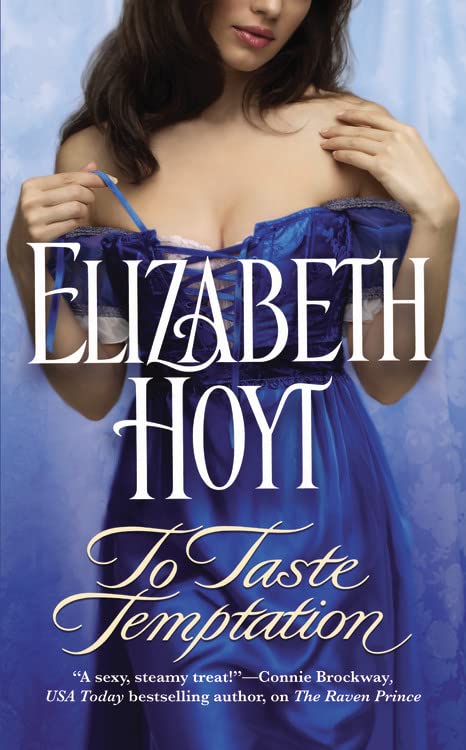 To Taste Temptation by Elizabeth Hoyt

Historical romance sensation Elizabeth Hoyt returns with a new exquisite romance, the first in a series about four soldiers searching for the man who betrayed them.

To Taste Temptation: Number 1 in series by Elizabeth Hoyt

The ton loves nothing more than a good scandal, and they're giddy with the appearance of wealthy Samuel Hartley. Not only is he self-made, American, and in the habit of wearing moccasins, but he is also notorious for fleeing a battle in which several English gentlemen lost their lives. What the ton doesn't know, though, is that Samuel is in London because of this massacre. He believes his regiment was given up to the enemy and won't rest until he finds the traitor.

Lady Emeline Gordon is captivated with Samuel. Not only does he defy convention with his unusual dress, his sensual smile, and his forthright manner, but he survived the battle that killed her beloved brother. Samuel suspects that the person responsible for her brother's death is Jasper Renshaw, Viscount Vale, a family friend since childhood - and Emeline's fiance. Despite Emeline's belief in Vale's innocence and her refusal to break off her betrothal, she and Samuel begin a passionate affair. But can their relationship survive the fallout from Samuel's investigation?

The first book of this Georgian-seet series is part love story, part history and part fairy tale. The politics and happenings of the day make it a fascinating story * HISTORICAL NOVELS REVIEW *
Elizabeth Hoyt lives in central Illinois with three untrained dogs, two angelic, but bickering children, and one long-suffering husband.
GOR001654438
9780446406918
0446406910
To Taste Temptation: Number 1 in series by Elizabeth Hoyt
Elizabeth Hoyt
Legend of the Four Soldiers
Used - Very Good
Paperback
Little, Brown & Company
2008-05-01
384
N/A
Book picture is for illustrative purposes only, actual binding, cover or edition may vary.
This is a used book - there is no escaping the fact it has been read by someone else and it will show signs of wear and previous use. Overall we expect it to be in very good condition, but if you are not entirely satisfied please get in touch with us
Trustpilot