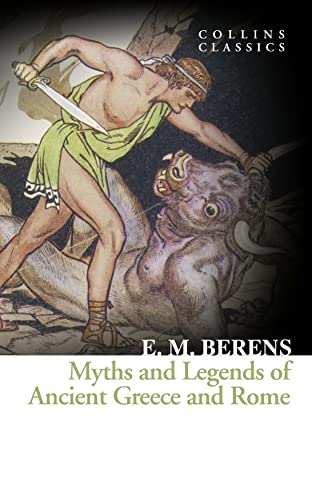 Myths and Legends of Ancient Greece and Rome by E. M. Berens

HarperCollins is proud to present its incredible range of best-loved, essential classics.

HarperCollins is proud to present its incredible range of best-loved, essential classics.

'This was the slaying of the Minotaur, which put an end forever to the shameful tribute of seven youths and seven maidens which was exacted from the Athenians every nine years.'

The gods, heroes and legends of Greek mythology and their Roman interpretations are as fascinating as they are instructive. They include the almighty Zeus and his many wives; heroic Perseus, slayer of the snake-headed Medusa; Helen of Troy, whose beauty caused a great war; Medea, driven mad by jealousy; and tragic Persephone, doomed to live half of each year in the Underworld, condemning the world above to winter.

First published in 1880, this comprehensive collection is an early modern retelling of the characters and tales of ancient Greece and Rome; a popular account which offers an important insight into the ancient civilisations that it evokes, and forms a basis for our understanding of the classical world.

E. M. Berens was a classical scholar and author who wrote several books exploring the mythology and oral traditions of ancient civilisations. Myths and Legends of Ancient Greece and Rome is his seminal work and was published in 1894.

GOR009616124
9780008180553
0008180555
Myths and Legends of Ancient Greece and Rome (Collins Classics) by E. M. Berens
E. M. Berens
Collins Classics
Used - Very Good
Paperback
HarperCollins Publishers
2016-09-19
304
N/A
Book picture is for illustrative purposes only, actual binding, cover or edition may vary.
This is a used book - there is no escaping the fact it has been read by someone else and it will show signs of wear and previous use. Overall we expect it to be in very good condition, but if you are not entirely satisfied please get in touch with us
Trustpilot