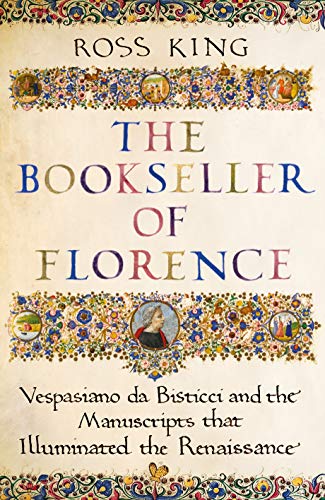 The Bookseller of Florence by Dr Ross King

The Bookseller of Florence: Vespasiano da Bisticci and the Manuscripts that Illuminated the Renaissance by Dr Ross King

'A spectacular life of the book trade's Renaissance man . . . King's supreme ability is to imagine himself into the past . . . The scope of his knowledge is staggering' JOHN CAREY, SUNDAY TIMES

An exhilarating and untold account of a Florentine bookseller working at the frontiers of human knowledge, and the epochal shift from script to print that defined the Renaissance

The Renaissance in Florence conjures images of beautiful frescoes and elegant buildings - the dazzling handiwork of the city's artists and architects. But equally important were geniuses of another kind: Florence's manuscript hunters, scribes, scholars and booksellers, who blew the dust off a thousand years of history and, through the discovery and diffusion of ancient knowledge, imagined a new and enlightened world.

At the heart of this activity was a remarkable bookseller: Vespasiano da Bisticci. Besides repositories of ancient wisdom by the likes of Plato, Aristotle and Cicero, his books were works of art in their own right, copied by talented scribes and illuminated by the finest miniaturists. His clients included popes, kings, and princes across Europe who wished to burnish their reputations by founding magnificent libraries. Vespasiano reached the summit of his powers as Europe's most prolific merchant of knowledge when a new invention appeared: the printed book. By 1480, the 'king of the world's booksellers' was swept away by this epic technological disruption.

A thrilling chronicle of intellectual ferment set against the dramatic political and religious turmoil of the era, The Bookseller of Florence is also an ode to books and bookmaking that charts the world-changing shift from script to print through the life of an extraordinary man long lost to history - one of the true titans of the Renaissance.

'A brilliant narrative that seamlessly weaves together intellectual debate, technological exploration and the excitement of new ways of thinking about ethics, politics and human capability' ROWAN WILLIAMS

A spectacular life of the book trade's Renaissance man . . . King's supreme ability is to imagine himself into the past . . . The scope of his knowledge is staggering -- John Carey * Sunday Times *
Excellent . . . a fascinating read . . . Though ostensibly a biography of Vespasiano, he is less the book's subject than its method: a window on to the intellectual, political and technological developments of a time in radical ferment. It is an astute choice by King, just as King - entertaining, witty and expert - is a fortunate fate for Vespasiano -- Tim Smith-Laing * Daily Telegraph *
A brilliant narrative that seamlessly weaves together intellectual debate, technological exploration and the excitement of new ways of thinking about ethics, politics and human capability as they evolved in one of the liveliest cultural environments in European history. It conveys a rare sense of immersion in the daily sights and sounds (and even smells) of fifteenth-century Italy -- Rowan Williams
A terrific and utterly absorbing read, full of narrative pace and remarkable breadth and depth of scholarship. It deserves to make the bestseller lists. How ingenious to find a way to tell such a compelling and important story, that of the epochal shift from script to print, through the experience of a single individual. I haven't enjoyed a history book as much for years -- John Guy
The Bookseller of Florence does for books what Ross King did for the art of Brunelleschi, Leonardo and Michelangelo: it conjures a vivid, lost world of manuscripts and learning. Written with an exquisite touch and enviable flair, King has written a book in defence of the pursuit of knowledge that's needed today more than ever -- Jerry Brotton, author of A History of the World in Twelve Maps
In the mid-fifteenth-century it must have seemed as if all the wisdom of the world was distilled into a single street in Florence. In this deft, sparkling book, Ross King reanimates the Street of Booksellers and the life of its most fascinating figure: Vespasiano da Bisticci -- Peter Moore, author of Endeavour: The Ship and the Attitude that Changed the World
A beautifully constructed work of popular scholarship, at once celebratory and elegiac. Ross King skilfully illuminates the career, interests and connections of a fifteenth-century maker of manuscript books, and in the process paints a compelling picture of Florence in the age of the Medici, and of the fascinating, fractured world of the European Renaissance, in the decades witnessing the final fall of the Byzantine Empire and the fateful appearance of the new technology of print -- Peter Marshall, author of Heretics and Believers: A History of the English Reformation
Magnificent . . . King's meticulous research provides an immersive reading experience as he expertly weaves the political intrigue of families vying for power and currying favour with the pope into a riveting intellectual history covering the evolution of books, Renaissance Italy, classical philosophy and literature, and the invention of the printing press. A profoundly engaging study of a time when books were considered essential to a meaningful life, and knowledge and wisdom were cherished as ends in themselves -- Bill Kelly * Booklist *
In this fascinating biography, King weaves Vespasiano's story into the fabric of the tumultuous times in which he lived . . . The result is a narrative about a man and his books, and so much more, including the origins and history of the Frankfurt Book Fair and the influence of Johannes Gutenberg and his printing press on the arc of history -- Linda Frederiksen * Library Journal *
Ross King is a renowned expert in the Italian Renaissance. He is the author of numerous bestselling and acclaimed books include Brunelleschi's Dome, Michelangelo and the Pope's Ceiling, Leonardo and the Last Supper and Mad Enchantment: Claude Monet and the Painting of the Water Lilies. His love of Renaissance Florence, which he has been studying, writing and lecturing about for over twenty years, made Vespasiano's long-forgotten story - never written about before - an irresistible next subject. He lives just outside Oxford.
GOR011243807
9781784742652
1784742651
The Bookseller of Florence: Vespasiano da Bisticci and the Manuscripts that Illuminated the Renaissance by Dr Ross King
Dr Ross King
Used - Very Good
Hardback
Vintage Publishing
2021-04-01
496
N/A
Book picture is for illustrative purposes only, actual binding, cover or edition may vary.
This is a used book - there is no escaping the fact it has been read by someone else and it will show signs of wear and previous use. Overall we expect it to be in very good condition, but if you are not entirely satisfied please get in touch with us
Trustpilot