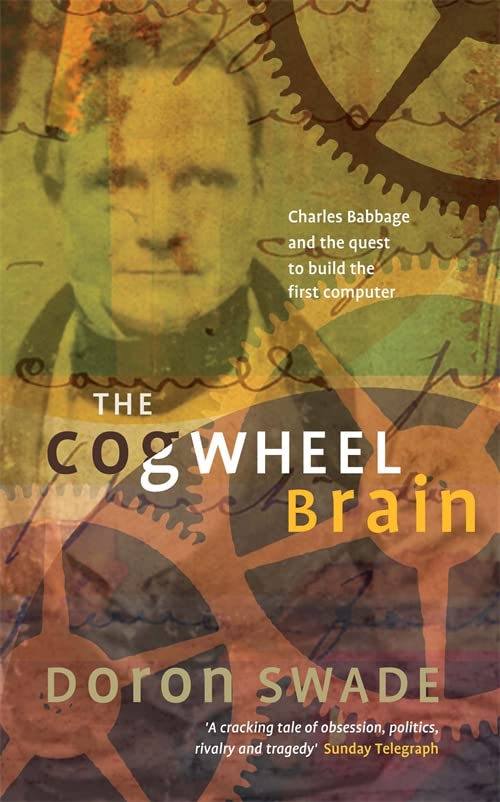 The Cogwheel Brain by Doron Swade

Vivid biography of Charles Babbage (1791-1871), the British scientist who 'invented the computer too soon'.

The Cogwheel Brain: Charles Babbage and the Quest to Build the First Computer by Doron Swade

In 1821, 30-year-old inventor and mathematician Charles Babbage was poring over a set of printed mathematical tables with his friend, the astronomer John Herschel. Finding error after error in the manually evaluated results, Babbage made an exclamation, the consequences of which would not only dominate the remaining 50 years of his life, but also lay the foundations for the modern computer industry: 'I wish to God these calculations had been executed by steam!'

A few days later, he set down a plan to build a machine that would carry out complex mathematical calculations without human intervention and, at least in theory, without human errors. The only technology to which he had access for solving the problem was the cogwheel escapement found inside clocks. Babbage saw that a machine constructed out of hundreds of escapements, cunningly and precisely linked, might be able to handle calculations mechanically. The story of his lifelong bid to construct such a machine is a triumph of human ingenuity, will and imagination.

[A] marvellous book... It is Sawde's total immersion in Babbage's machines and in the man himself... that makes THE COGWHEEL BRAIN so compelling. * SPECTATOR *
LONGITUDE Mark 2 * GUARDIAN *
Doron Swade is senior curator at the Science Museum in London, and the instigator of the construction of one of Babbage's Difference Engines, completed in 1991.
GOR001204436
9780349112398
0349112398
The Cogwheel Brain: Charles Babbage and the Quest to Build the First Computer by Doron Swade
Doron Swade
Used - Very Good
Paperback
Little, Brown Book Group
2001-08-02
352
N/A
Book picture is for illustrative purposes only, actual binding, cover or edition may vary.
This is a used book - there is no escaping the fact it has been read by someone else and it will show signs of wear and previous use. Overall we expect it to be in very good condition, but if you are not entirely satisfied please get in touch with us
Trustpilot