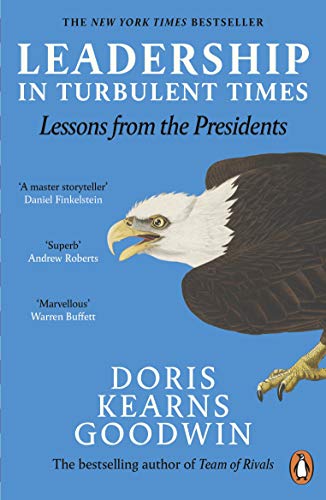 Leadership in Turbulent Times: Lessons from the Presidents by Doris Kearns Goodwin

In this culmination of five decades of acclaimed studies in presidential history, Doris Kearns Goodwin offers an illuminating exploration of the origin, uncertain growth, and finally, the exercise of fully developed leadership.

Are leaders born or made? Where does ambition come from? How does adversity affect the growth of leadership? Does the man make the times or does the times make the man?

In Leadership Goodwin draws upon four of the presidents she has studied - Abraham Lincoln, Theodore Roosevelt, Franklin D. Roosevelt and Lyndon B. Johnson - to show how they first recognized leadership qualities within themselves, and were recognized as leaders by others. By looking back to their first entry into public life, when their paths were filled with confusion, hope, and fear, we can share their struggles and follow their development into leaders.

Leadership tells the story of how they all collided with dramatic reversals that disrupted their lives and threatened to forever shatter their ambitions. Nonetheless, they all emerged fitted to confront the contours and dilemmas of their times.

No common pattern describes the trajectory of leadership. Although set apart in background, abilities and temperament, they shared a fierce ambition, a hunger to succeed beyond expectations. All four, at their best, were guided by a sense of moral purpose that led them at moments of great challenge to summon their talents to enlarge the opportunities and lives of others.

This seminal work provides a roadmap for aspiring and established leaders. In today's polarized world, these stories of authentic leadership in time of surpassing fracture and fear take on a singular urgency.

(Previously published as: 'Leadership: Lessons from the Presidents for Turbulent Times')