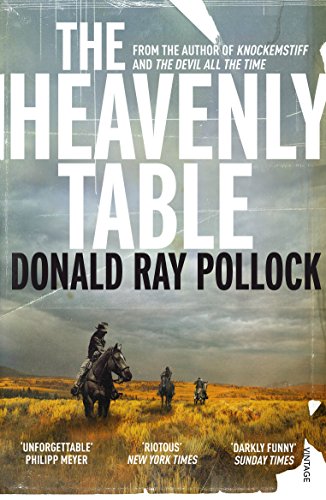 Cane, Cob and Chimney Jewett are young Georgia sharecroppers held under the thumb of their God-fearing father, Pearl. When he dies unexpectedly, they set out on horseback for Canada, robbing and looting their way to wealth and infamy. But little goes to plan and soon they're pursued by the authorities...

Cane, Cob and Chimney Jewett are young Georgia sharecroppers held under the thumb of their God-fearing father, Pearl. When he dies unexpectedly, they set out on horseback for Canada, robbing and looting their way to wealth and infamy.

But little goes to plan and soon they're pursued by both the authorities and the stories emanating from their trail of destruction - making the Jewett Gang out to be the most fearsome trio of murdering bank robbers in the Midwest. The truth, though, is far more complex than the legend. And the heaven they've imagined may in fact be worse than the hell they sought to escape.

The Heavenly Table is brilliant and unforgettable. In his trademark blend of humor and pathos, Donald Ray Pollock gives us a view into life's dark corners, without ever forgetting there is a lighter side as well

-- Philipp Meyer * author of American Rust and The Son *
Dark, violent and funny, this book will be like nothing else you've ever read * Evening Standard *
There is something of the Coen Brothers in The Heavenly Table. This too is southern gothic... with a cast of grotesques, eccentric plot twists and humour of the blackest pitch... Pollock writes like an angel - an angel that has escaped from Knockemstiff lunatic asylum. * The Times *
A tale of weird and darkly funny invention. * Sunday Times *

A blood-laced tale of three brothers who rob and kill their way across the US. [The Heavenly Table] will be a book you won't be able to stop recommending once you've finished... A bit like reading Hunter S Thompson crossed with Cormac McCarthy - and a sprinkling of Nick Cave chucked in for brutal measure. It's the kind of book you just know the Coen Brothers are itching to adapt, with its vast array of quirky characters and black humour

* ShortList *
Donald Ray Pollock's brilliant Western is an earthy, raunchy read - Dickensian in its rogue's gallery of oddball characters. Full of black humour, it's superbly constructed and written with true grit. By the end, one is left longing for more and panting for the movie that will surely come -- John Harding * Daily Mail *
Wild, rollicking, and wonderfully vulgar... A riotous satire that takes on our hopeless faith in modernity, along with our endless capacity for cruelty and absurd pretension. * New York Times *
Truly fabulous... A very wry comedy... When reviewing, I usually mark down pages with particularly well-honed phrases: I stopped doing so when reading The Heavenly Table as I probably would have bookmarked every page...Witty and expansive... I am tempted to say that anyone wanting to understand contemporary America's political direction might be well advised to start with this novel. -- Stuart Kelly * Scotsman *
A fine (and often very funny) multi-stranded yarn, set at the dawn of US involvement in WW1 with the nation on the cusp of modernity. As Tarantino's The Hateful Eight dared onscreen, The Heavenly Table lances the boil of modern America on the page. * The Skinny *
Pollock's freewheeling, blood-spilling story is well matched by his prose. * Literary Review *
The darkest of Southern Noir... You'll need a strong stomach and may want a hot shower afterward, but you'll never forget Pollock's compelling characters. * Crime Fiction Lover *
In a crowded room full of voices, Don Pollock's voice is so distinct you'll hear first and won't ever, ever forget it. Nor will you want to. And the kicker is this: He somehow keeps getting better. -- Tom Franklin * author of Poachers and Crooked Letter, Crooked Letter *
The Heavenly Table is the latest and strongest evidence that Donald Ray Pollock is one of the most talented and original writers at work today. With uniquely vivid and graceful prose he renders a tale destined to linger in the reader's mind, a story by turns violent and darkly amusing, and always powerful. The novel is sure to be ranked among the year's best. -- Michael Koryta * New York Times-bestselling author of Those Who Wish Me Dead *
The Heavenly Table is a ferociously gothic ballad about desperate folks with improbable dreams and scant means. It is potent and chimeric, dank, violent, swamped in tragedy-and funny as hell. -- Daniel Woodrell * author of The Maid's Version and Winter's Bone *

Donald Ray Pollock is a master-worker. This great novel flows like buttermilk, so smooth and entertaining that you won't be ready for the left hook it delivers to your heart or its sophisticated moral analysis of human life. Pollock has an omniscient eye like Gogol, taking in a vast scene while spinning tales within tales. Readers will love him, writers will study him.

-- Atticus Lish * author of Preparation for the Next Life *

After quitting school at seventeen, Donald Ray Pollock worked at Mead Paper Mill and as a truck driver in Chillicothe, Ohio. After thirty-two years employed as a labourer he enrolled at Ohio State University to study creative writing.

He is the author of two acclaimed books, the cult-classic short-story collection Knockemstiff, which went on to win the PEN/Robert Bingham Fellowship, and the novel The Devil All The Time.

NGR9781784703240
9781784703240
1784703249
The Heavenly Table by Donald Ray Pollock
Donald Ray Pollock
New
Paperback
Vintage Publishing
2017-07-20
384
N/A
Book picture is for illustrative purposes only, actual binding, cover or edition may vary.
This is a new book - be the first to read this copy. With untouched pages and a perfect binding, your brand new copy is ready to be opened for the first time
Trustpilot